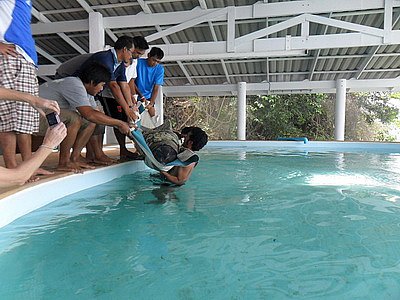 PHUKET: Experts at the Phuket Marine Biological Center (PMBC) are nursing a sick bottlenose dolphin back to health after it was found floating in the polluted shallows of Klong Tha Cheen in Rassada yesterday.

The dolphin, fully grown at around two metres long, is being looked after by the Marine Endangered Species Unit at the PMBC, located at Cape Panwa.

Kongkiat Kittiwatthanawong, chief of the unit, said the dolphin was discovered by fishermen around 12pm yesterday. It was found close to where a huge leatherback turtle was found dead earlier this year from ingesting plastic bags.

Fishermen told Mr Konkiat they had encountered a pod of eight or nine dolphins the previous night around 25 nautical miles off the coast, near Koh Maithon in Rawai subdistrict.

The sick dolphin probably followed them back to Phuket, they said.

When officials examined the bottlenose they found it was bleeding and had scrape marks along its body. This probably came from the animal being thrown against the rocks by waves as it lay in the shallows.

The dolphin is able to swim well, but can only dive for short periods. Biologists think it has a problem with its respiratory and digestive systems.

It is excreting a runny green pus, which leads them to suspect bacterial infection.

They are observing the dolphin’s condition closely and will take a blood sample to establish the cause prior to treating it with drugs.

They expect to be able to release the animal back into the wild in one to two weeks, after which time they hope it will return to its pod in Phang Nga Bay.