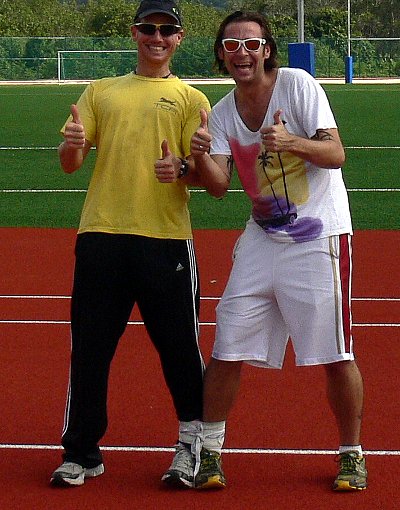 PHUKET: Athletes of the highest caliber have graced Phuket over the past two weekends at Laguna’s week-long triathlon festival, but their efforts pale in comparison to what lies ahead for Russell Distance Russell and Jay leShark on Saturday.

At 1pm on December 10, Russell (aka “Sniffer”) and Jay will begin their attempt to stomp their mark on history by walking a minimum of 102 kilometers in 24 hours beginning at Thanyapura Sports and Leisure Club.

Not so difficult one might suggest. Correct, but this is no ordinary endurance exploit.

These supreme athletes will make their assault on the record in three-legged fashion, bound together for parambulation in unison.

Physical fitness is of great importance to their success, but the psychological weight of this journey is even greater.

Despite being close friends, Russell and Jay have had to come to terms with the fact that they will not be able to release from each other’s manly grasps of support even for a moment.

Fearful scenarios flash through the mind’s eye. The image of Paula Radcliffe in the 2005 London marathon seeps in, as does the concern over injury or every athletes biggest fear – dreaded nipple rash.

Another mental strain must be that of communication. What can two men talk about for 24 hours while walking together and holding each other?

Will Russell enjoy listening to stories of Jay’s joy of fatherhood? In turn, can Jay tolerate Russell’s conversation on canine concerns or Liverpool’s reemergence as a football force?

In any case, these two brave souls will put their bodies and friendship on the line for charity.

Funds raised will go to the Phuket Animal Wefare Society (PAWS) and sponsorship can be offered per kilometer, per hour or for breaking the record.