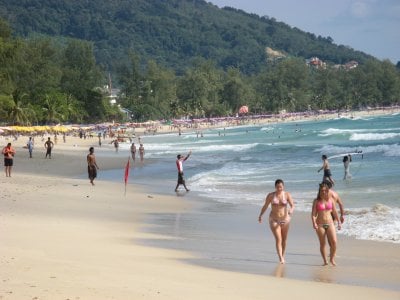 Hotel occupancy rates are reportedly about 80%, marking a 20% to 30% increase on last year, with Patong being one of the busiest places on the island, according to TAT figures.

Phuket Tourist Association (PTA) President Maitree Narukatpichai reported that the PTA’s statistics were less impressive but he was still happy with the situation, saying that hotel occupancy in Phuket was currently between 60% and 70%.

K. Maitree told the Gazette that hotels such as the Holiday Inn Phuket Resort and the Phuket Merlin Hotel are operating at up to 90% occupancy. Hotels in Kata and Karon are running at about 50% occupancy, while Hilton Phuket Arcadia Resort and Spa is at 60%, he added.

“We are all doing our best to promote tourism during the green season. For example, for Phuket Walk & Run on September 30 we have been working with 21 Japanese tour operators to sell about 500 packages for people to visit Phuket. The Japanese like this kind of sport,” added K. Suwalai.

“Tourism in Phuket has been gradually improving since the tsunami. I think that next year will be even better, especially with more charter flights from places like Scandinavia,” said K. Methee.