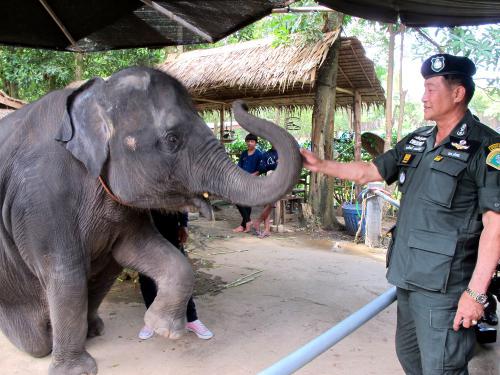 PHUKET: Two of the men involved in the elephant-smuggling operation blown open in Phuket in August will be presented in court this Thursday.

Meanwhile, officers leading the investigation will move to have arrest warrants issued for public officials involved in the trafficking ring.

Mr Surat and Mr Prasong have both confessed to conspiring with a Provincial Chief Administrative Officer in Chaiyaphum province, in Northeast Thailand, by filing false elephant registration documents for approval.

The illicit registration documents were issued for 69 elephants suspected of being trafficked across the border from Myanmar.

The high-ranking Chaiyaphum official has since retired.

“We are also going to request arrest warrants for the officers involved in the case,” Lt Nithit told the Phuket Gazette.

During the raids on seven elephant-trekking camps in Phuket, a popular attraction for tourists, officers collected blood samples for DNA tests (story here).

Work continues on establishing whether or not the elephants were trafficked or poached from the wild, or are offspring stolen from elephants registered in Thailand.

“It will take at least one more month,” he said.

At this stage, none of the Phuket elephant camp owners will face legal action.

“This is not the fault of the elephant camp owners,” the NREC Commander, Pol Maj Gen Norrasak Hemnithi, told the Gazette in August.

“They did not know the registration documents they were given were fake, and the process of how those registration papers were issued was not transparent,” he said.