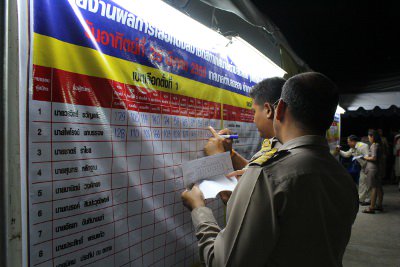 PHUKET: Preliminary results of two local elections in Phuket yesterday indicate that Phudit “Ko Noi” Raksarat will take over administration of Rassada Municipality, while Somran Jindapol has been elected Mayor of Chalong Municipality.

Before yesterday’s election, Mr Somran was incumbent president of the Chalong Tambon Administration Organization (OrBorTor), which was upgraded to municipal status on October 1 last year.

In Rassada, unofficial results, yet to be confirmed by the Election Commission (EC) in Bangkok, were tabulated by election officials last night.

Mr Phudit’s win with 53.4% of the vote was backed up by a strong showing by fellow members of his Rassadanuwat Group, who took 11 of the 12 councils seats in Rassada.

Police presence was heavy at the polling stations. At the station on Rassadanusorn Road, near the Rassada Municipality offices, police had their hands full keeping one man, who appeared ragged and drunk, away from the registration table.

A Gazette reporter noted that at least five different mom-and-pop stores in the Baan Kuku area were selling alcohol to customers during the polling, even though such activity was banned from 6pm Saturday until midnight last night. Some of the vendors were unaware of the ban, while others were aware of it but chose to ignore it.

A vendor at one of the shops, which bore a window awning with campaign pictures of one of the competing teams, told the Gazette that business had been brisk all day.

Thus far there have been no reports of any arrests for selling alcohol during the restricted period in either Rassada or Chalong.

Turnout was just over 59.9% of 14,632 eligible voters. Of this number there were 243 who chose the “no vote” option and 331 whose ballots were deemed “spoiled” by election officials.

The results remain unofficial until they are approved by the EC in Bangkok, who will work with their Phuket office to consider and rule upon any reports of electoral fraud.

The Phuket office of Election Commission this morning confirmed to the Gazette that so far no complaints have been filed regarding either election.

The EC in Bangkok has 30 days to confirm the results.

Phuket Sports: Pulsating play in round six of PSSL