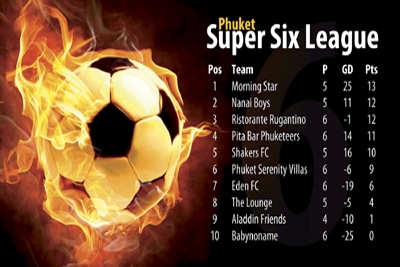 PHUKET: The Pita Bar Phuketeers and Eden FC got the ball rolling for round six of the Phuket Super Six League (PSSL) last Wednesday evening at Headstart’s Football Island.

The Phuketeers grabbed an early 2-0 lead when Yannik Christll tapped in after Fabian Kleiner Scniedelmann’s shot was spilled by the goalkeeper. Christll doubled his team’s advantage with a fine solo effort before Joseph Arimathea pulled a goal back for Eden to make it 2-1 at half time.

The second half continued to be tight and scrappy, but Phuketeer debutant Ben Keiley carved his way through the Eden defense to open his PSSL account and reinstate the two-goal lead.

Eden piled on the pressure and again reduced the deficit to a goal from a Kittichart Naunsri strike, but the Phuketeers could not be tempted into giving up three points and held on for the win. Schniedelmann was awarded Man of the Match after an outstanding performance. Pita Bar Phuketeers v Eden FC: 3-2.

Table toppers Shakers FC and Ristorante Rugantino were next on the pitch in a game that was to become the most intense PSSL battle so far. Rugantino arrived with a full squad and the disciplined Shakers youngsters knew they were in for a tough ride. The game exploded into action with neither team giving any quarter.

Shakers broke the tense deadlock with a Ross Robinson goal, but it was canceled out by Jacopo Jajo’s mazy individual run. Shaker’s were back in front after Mikael Lundin cheekily found the near post and from there the game rocked back and forth at a dizzying pace, leaving it 3-4 to Rugantino at the break.

With adrenaline coursing through the players, the second half continued in the same vein. A Stig Edvardsen ‘cannonball’ gave Rugantino a two-goal lead, before the Shakers replied with two goals by Axel Jehangir and Lundin to level the scores at 5-5.

Outstanding defensive work by Ryan Meihart neutralized many of the Rugantino attacks, but with time running down, another Edvardsen drive put Rugantino in front. Despite the obvious fatigue in both teams, Rugantino managed to consolidate their lead with Jajo polishing off the game’s scoring. Shakers FC v Ristorante Rugantino: 6-8.

The third game of the evening started out as an exciting affair, which unfortunately had to be called off in the second half due to unsportsmanlike conduct by players on both teams. The game was called off on the result 3-3, and both teams will be awarded a single point. Aladdin Friends v The Lounge: 3-3.

In the last game of the evening, the Nanai Boys played a slightly under-powered Phuket Serenity Villas (PSV). Although the game was quite even in terms of play, the Nanai Boys showed much more efficiency up front. The Nanai Boys’ Sunny Gulati continued his goal spree, and showed class by hitting several early goals past the PSV keeper.