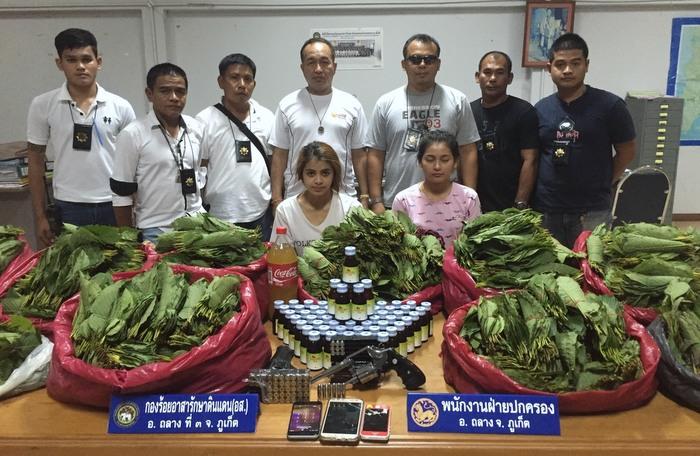 PHUKET: Thalang Police arrested two women and are searching for four other suspects after a raid yielded more than 40 kilograms of kratom leaves in Mai Khao last night.

Police were alerted to the goings-on when neighbors filed a complaint about suspected drug activity at the residence.

“When we arrived, we saw four men flee the scene,” said Thalang Chief Administrative Officer (Palad) Siripong Leeprasit. “Unfortunately, we were unable to catch them.”

During the raid, police recovered nine bags of kratom leaves weighing about 43 kilograms in total, 62 bottles of cough syrup, a .38mm Smith & Wesson pistol and matching ammunition, a 1.25 liter bottle of kratom juice and other drug and firearms paraphernalia.

“The two women claimed that the kratom belonged to the other four,” Mr Siripong said. “We are now searching for them using information that the women provided.”

Ms Wasinee and Ms Chutharat were charged with possessing and producing a Category 5 drug with intent to sell, illegal possession of a firearm, and selling medicine without permission.