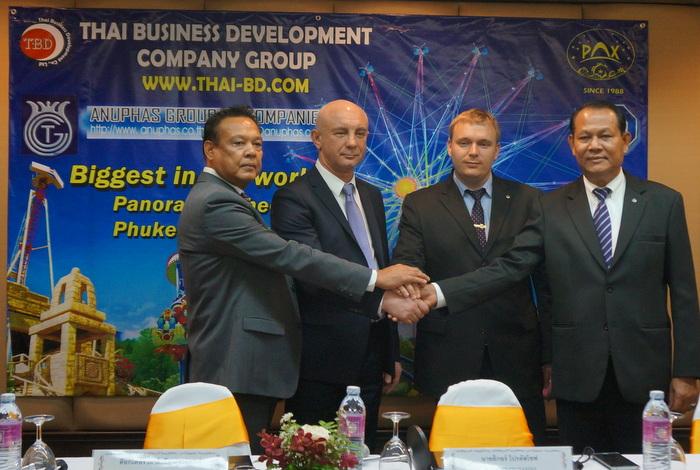 PHUKET: The world’s highest Ferris wheel will be built in Phuket, investors announced this afternoon.

“The Giant Ferris Wheel will break the record for the highest Ferris wheel in the world. It will be Phuket’s land mark,” said Igor Protasov, the chief executive officer for Thai Business Development Co Ltd (TBD).

Currently, the highest Ferris wheel in the world is the ‘High Roller’ in Las Vegas, which is 167.6 meters high.

“The Giant Ferris Wheel will attract tourists from around the world to Phuket, and create important revenue and employment opportunities,” Mr Protasov said.

The project is a joint venture between TBD, Anuphas Group and PAX Group.

Mr Protasov explained that the wheel would take about two years to build and that other attractions would be added to the 40-rai area set aside for the project. Though the land is owned by the Anuphas Group, Mr Protasov declined to give further details on exactly where the project will be built, how tall it will be or how much it will cost to build.

This isn’t the first time someone has rolled a big Ferris wheel plan onto the island.

In 2013, the Patong municipality was looking to find a location to set up the Patong Eye, a giant Ferris wheel that they hoped would spin out fresh revenue during and after the Patong Carnival (story here).

However, that particular plan never got off the ground.

The new plan has been presented to Phuket Governor Chamroen Tipayapongtada, who has tentatively approved it, pending a review of all applicable laws and regulations, said Mr Protasov.

“It will take some time before we can start building. However, we are eager to get started on it as soon as possible,” confirmed PAX Group President Vladimir Gnezdilov. “We see Phuket as one of the top 10 tourist destinations in the world, drawing both middle-class and high-end tourism markets. These factors make the island a good fit for our project.”