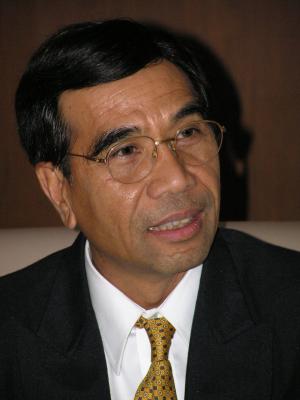 PHUKET TOWN: Governor Udomsak Usawarangura held a conference with 100 of the island’s top officials and business leaders yesterday at the Royal Phuket City Hotel to finalize the draft strategic plan for Phuket’s development. The draft plan, which emphasizes tourism development, will be presented to Deputy Prime Minister Somkid Jatusripitak this week, following a meeting of all 75 provincial governors being held at the Civil Service College in Pathum Thani, which started today. The government has required all provincial governors to submit such plans, and has designated Deputy Prime Ministers to oversee the system to ensure the schemes are consistent with regional and national development objectives. Thailand’s 75 governors, who have recently been given CEO-style powers to run their provinces, have been grouped into 20 teams so that they can help each other draft strategic development plans for their provinces. Before submission to the Cabinet, the governors will get a refresher course in report writing. On completion of the course, the governors will submit their reports to K. Somkid on Tuesday and Wednesday Gov Udomsak said Phuket’s plan is based on making the island a world-class tourist destination while highlighting local culture and history. This would include developing Phuket into an “international city” and marketing this image abroad. To achieve these aims, a three-point strategy is being recommended: sustaining core strengths; making tourism more “value-added”; and improving the infrastructure Gov Udomsak said that in 2004, Phuket expects average daily spending by foreign tourists to increase from 800 baht to 1,300 baht. He feels this dramatic increase is achievable because this year Chiang Mai had seen a daily expenditure of 1,100 baht by foreign tourists. As key elements in this aim he mentioned construction of the controversial International Convention and Entertainment Center (ICEC) at Saphan Hin, promotion of the island as a hub for low-cost medical and spa treatments, and development of the marine tourism industry through the construction of new marinas and elimination of taxes on imported yachts. All governors are currently considered “on probation” by the government, with PM Thaksin threatening to replace any provincial administrator who fails to produce quantifiable results after six months. Gov Udomsak told the Gazette that the development plan was separate from the personal plan he will submit to the government, which will be used to judge his performance.

Bus passes to be launched in December