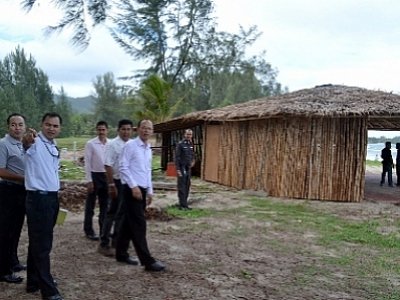 PHUKET: A handful of bars and restaurants built on Bang Tao Beach are being investigated to determine whether or not they are encroaching on state land.

Vice Governor Somkiet Sangkaosutthirak on Wednesday led a team of investigators to the site.

Mr Prapan asked the Phuket Gazette to withhold the name of the complainants out of fear for their safety.

The complaint, dated March 24 and addressed directly to Phuket Governor Tri Augkaradacha, claimed that many people had moved onto the beachfront land and that the new structures blocked views to the sea.

The company paid compensation to those people in 2008 so that they would stop building and move from the area, but the same people returned and started building structures at the site last year.

Businesses that operated from the new structures included beer bars, massage services, beach bed and umbrella rentals, and restaurants with toilets, all on public land near a Muslim graveyard, the complaint said.

Police and the local authorities had been notified of the alleged incursion, but they failed to help, it added.

However, none of the business operators were present on the beach on Wednesday when V/Gov Somkiet arrived. All the buildings were empty or closed.

“From what I have seen, some of the buildings were built no more than three months ago,” said V/Gov Somkiet.

“There are five or six buildings spread about 200 meters along the beach. We have to see whether they [the building owners] have the appropriate construction permits and land titles. If they do not, they will have to remove the buildings,” Chief Prapan said.

However, V/Gov Somkiet made it clear that regardless of whether any investigators thought the new structures were legal or not, the investigating committee was bound to follow due legal process.

“We cannot remove these buildings immediately. First, the police have to find the building owners and we must obtain a court order before we can take further action.

“The owners of the buildings may be able to prove ownership of the land. We have to give them the chance to show whether or not the land belongs to them,” he said.

“The court is the only one who can pass judgment, and the only authorities with the power to remove the buildings are the Thalang District Chief and the Cherng Talay Mayor,” he added.

Determining whether or not the structures were “on” the beach was a matter for local figures to decide.

“The kamnan [tambon chief] or district chief must point out which areas are deemed to be on the beach.

“Also, the Land Office must verify the title deed and corresponding plot markers. To my eyes, the beach area is about 20 to 30 meters [from the water],” he said.

The investigation team then strolled north to the Babylon Beach Club, which was deemed to be illegally encroaching onto the beach.

“The restaurant manager promised us to move the restaurant [from the water’s edge]. We will examine the documents [to prove ownership of the land],” V/Gov Somkiet said.

“We did not tell him how many meters the restaurant should be moved. But some parts of the restaurant building extend into the sea [at high tide] which is obviously illegal. I will let Cherng Talay Municipality, Phuket Marine Office, and Thalang District Office follow up on this issue,” he added.

Suchat Yuyen, the Deputy Mayor of Cherng Talay Municipality, said, “We will proceed with the buildings which we received complaints about first. For the Italian restaurant [Babylon], we will ask if they have their documents such as title deeds and construction permits.”

The investigation team did not inspect the restaurants about 300 meters further north, where the owners have consistently refused to obey provincial orders to remove their structures from the sand.

In the Phuket Gazette‘s page one story in the November 13 issue last year, Cherng Talay Tambon Administration Organization (OrBorTor) President Manote Panchalad said, “If we do remove buildings there, villagers who have businesses there will get together and put pressure on us.”