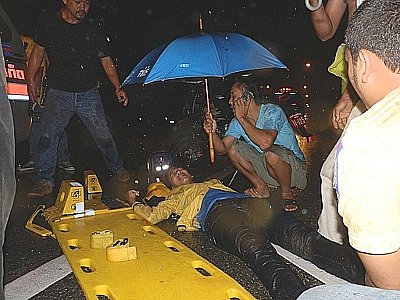 PHUKET: A young woman was badly injured in a hit-and-run collision with a passenger van near Phuket’s Heroines’ Monument late last night.

The victim, 23-year-old Somying Samart, was riding home from her job as a civil defense volunteer in Muang District at about 11:30pm when the accident occurred, on Srisoonthorn Road westbound in Srisoonthorn subdistrict.

As Acting Sub Lt Somying was negotiating the notorious “Andaman Curve”, about 350 meters west of the Heroine’s Monument, she was hit by a speeding passenger van that continued westbound towards Cherng Talay without slowing or stopping.

The curve has been the site of numerous accidents in recent years, many of them hit-and-run incidents.

Local residents used umbrellas to shield the young soldier from the rain until rescue workers arrived.

Sub Lt Somying was shivering with cold and crying in pain when Thalang Police and Phuket Kusoldharm Foundation (Bang Khlam Unit) rescue workers reached the scene. She suffered trauma to her hip and left leg, which was put in a splint by rescue workers who transported her to Thalang Hospital for treatment.

A rescue worker at the scene said Ms Somying would likely be admitted and undergo an x-ray imaging to see if any bones were broken. She was spared more serious injury because she was wearing a crash helmet, the rescue worker said.

Her Kawasaki KSR minibike did not appear to be badly damaged in the crash, he added.

Thalang Police noted the details of the accident and are investigating to try and find the driver of the passenger van.