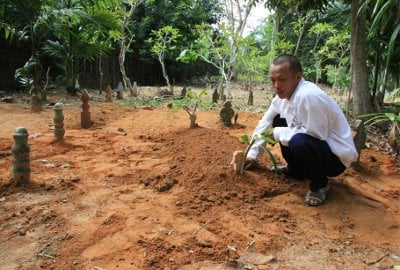 PHUKET: The father of Anupong Sae-Yu, the four-year-old boy who died in the accident at the Kor En curve on Thepkrasattri Road on Sunday, today tearfully urged motorists to slow down while passing the village.

Speaking beside his son’s grave this morning, Somkid Opartwanitchkul told the Phuket Gazette, “He was only four years old and a kindergarten student. I want to ask everyone to please pay attention on the road when you are driving.”

Mr Somkid said he had yet to see his wife, Saijai Boontaeng, 31, who was the only person on the motorbike to survive the impact from the pickup truck.

Kittituch Maitreejit, a registered nurse at Vachira Phuket Hospital, told the Gazette today that to the best of her knowledge Ms Saijai was recovering in a stable condition.

The Gazette could not confirm whether or not Ms Saijai had learned of young Anupong’s fate.

Village elder Konee told the Gazette, “I would like to spread the message through the Phuket Gazette for everyone to see Kor En people’s lives as important. Many of our villagers have died at the curve. All life is precious, once it’s lost, you cannot get it back.

“I would also like to ask Phuket provincial officers to fix this deadly curve. We have waited long enough.

“There are many government departments in Phuket who can solve this problem. Please help us. Phuket has grown so much as an international tourist destination. How can this problem happen in such a high-reputation city?” he added.