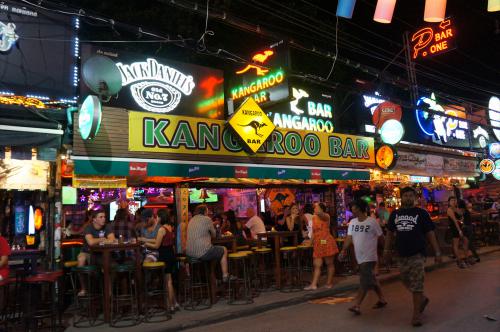 “I handed the complaint personally to Suranand Vejjajiva, the Secretary General to the Prime Minister of Thailand Yingluck Shinawatra,” Phuket businessman and adviser to the Thailand Trade Organization Chart Chindapol announced today.

Speaking to the press this morning, Mr Chart alleged that formal complaints filed to the “highest-ranking government official on the island” had yielded no response.

“Local government officers are not serious in following this up. The highest-ranking government officer on the island just called on the relevant department heads to discuss and inspect the problem, after that he went back to sleep.

“He is willing to let the problems from the past stay, and instead is focusing only on tackling new problems. The old problems have never been solved,” Mr Chart said.

Mr Chart repeated his claims of August 23, that at least 17 government offices in Phuket are involved in extracting bribes from local businesses to overlook (‘not see’) closing times and to “protect them” (story here).

“At this stage, we have enough evidence to identify the places where police have been collecting money and how they collected it, but I cannot reveal this to the media,” he stated.

However, Mr Chart publicly named one relatively low-ranking officer* from an elite division of the Royal Thai Police as the bagman who collected the illicit payments.

“Among the officers, he collects most of the money from Patong business owners, about 4 to 5 million baht per month,” Mr Chart said.

“He asks for money from all kinds of businesses, including entertainment venues and businesses involved in land encroachment, and he supports foreign mafia operators in Phuket.

“He claims that the money goes to all the highest-ranking police officers in Phuket,” Mr Chart alleged.

“He takes a cut of the profits made by some of the businesses in addition to the standard fee,” he added.

Mr Chart today also announced that he will set up his own “complaint center” that will bypass officials in Phuket and be brought directly to the appropriate officers in Bangkok.

“To help people who have similar problems, I will open an office to receive complaints and help them without going through local government offices,” he explained.

“The center will be called the ‘Complaints Center for the People – Andaman Region’, which I hope to open as soon as possible,” he said.

Patong Entertainment Business Association (PEBA) president Weerawit Kureasombut, also present at the the press conference today, warned that further inaction by the government will result in Patong business owners having to shut down their venues.

“The entertainment business owners are in trouble. We cannot afford to keep making such payments, so we filed a complaint in February to the Phuket Governor, but so far nothing has happened.

“So we filed a written complaint [to the Governor] again and handed a copy directly to the Prime Minister’s Office. We also sent copies to the Ministry of Tourism and Sports, Ministry of Interior, Royal Thai Police and relevant departments,” he added.

“The complaint was received by the Prime Minister’s Office on October 7. We will give the government 15 days [until October 31] to take action. If nothing happens, we will do something to let them know that we are in distress,” he warned.

“In the complaint, we explained that we want to extend the closing time for our venues to 4am. The Public Entertainment Place Act BE 2509 currently allows entertainment venues to be open until 1am only – and this is costing us a lot of potential income because our customers do not start coming to the venues until about 11pm.

“If we are allowed to be open longer, we could generate more money, which would mean a lot more tax revenues would be collected by the government,” he explained.

“It would be better if the government made late trading legal so that money currently being paid under the table would go directly to the government for public development,” Mr Weerawit said.

* The Phuket Gazette is withholding the alleged bagman’s name until that person has been verified as implicated in the collection of bribes on behalf of public officials.

Action to be taken on coral, wastewater at Racha Island