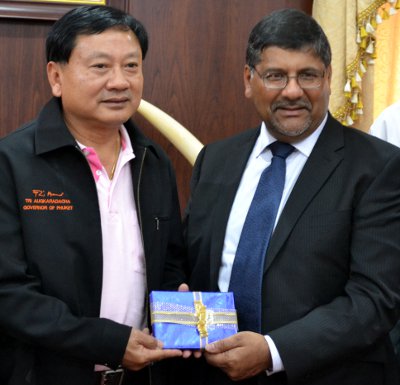 PHUKET: UK Ambassador to Thailand Asif Ahmad met Phuket Governor Tri Augkaradacha this afternoon to discuss a slew of issues affecting British residents and tourists, with the aim of working together with local authorities to boost safety on the island.

“We have 850,000 British tourists who visit Thailand every year. I’ll say up to half come to Phuket… The majority of British residents and tourists here have nothing other than a good time – only a few have problems,” said the ambassador.

“The biggest challenge for us is to educate and advise our own citizens: Do not do in Thailand what you would not do at home. Nobody in the UK would go on a motorcycle without a helmet. It’s impossible. They’d be arrested in five minutes.

“It’s a serious issue – we lose many people here from motorcycle injuries – and there are an alarming number of injuries. That’s something we want to work on,” he added.

“We want to come back to Phuket before June to run a campaign to explain to tourists about basic safety, including to not go swimming in the monsoon season,” Amb Ahmad said.

The ambassador also raised the issue of how reports of sex attacks, regardless of victims’ gender or nationality, were handled by police.

“I have been discussing this today, especially crimes and sex offenses against women. If they are attacked, no matter whether they are Thai, Russian or British – the issue is the same.

“Police should be trained to deal with the situation sympathetically – and women officers, not male officers, should be handling the investigation,” he said.

“I want to bring some British expertise in these area, and counseling on prosecution. That’s one good example of something we can cooperate with Thailand on,” he added.

Phuket Provincial Police Commander Pekad Tantipong, who met Amb Ahmad earlier in the day, told the Phuket Gazette, “Ambassador Asif said he will help by talking to the Commissioner-General in Bangkok about the need for female police officers in Phuket.

“Right now there are no female investigation officers in Phuket,” he said. “All of them work at [Royal Thai Police] headquarters in Bangkok. If they transfer a few female officers to us, that would be great.”

Cdr Pekad said his office had formally requested female officers to be posted to Phuket, but had yet to receive a reply.

“Phuket police are still using male officers to investigate these cases, and female foreign victims do not feel comfortable talking about this in front of male officers,” he said.

“We need cooperation from the victims, otherwise we cannot do anything about the attack,” he added.

Regarding threatening jet-ski operators and bogus insurance claims, Amb Ahmad said that he believed the issue was mixed.

“There are appropriate places for jet-skis. I am not sure a crowded beach is one of them. I believe some claims of damage being done to jet-skis are genuine, and that not all jet-ski operators are ‘bad’, but the bad ones do need to be dealt with,” he said.

Gov Tri said, “We admit that problems exist and we are trying hard to solve them.”

He pointed out the recent breakthrough in having most tuk-tuks in Patong agreeing to set maximum fares, with public feedback to be collected after three months.

However, Amb Ahmad suggested that all tuk-tuks in Phuket be fitted with meters, like taxis in Bangkok.

“I think [the tuk-tuk situation] is not perfect, but it’s getting better… [If meters were installed]. What the meter tells you is what you pay. That’s the best way to deal with this situation,” he said.

Last night in speaking with the press, Amb Ahmad announced some good news for residents on the island.

He confirmed the British embassy in Bangkok was looking to return to Phuket in June or July with “surgeries” offering consular services similar to those conducted by the US embassy.

He also praised the efforts of British Honorary Consul to Phuket Martin Carpenter, who “does a lot of invaluable ‘front line’ work for us very well,” he said.

Mr Carpenter confirmed there were “between 5,000 and 6,000” British nationals living on Phuket.

Phuket cobras running out of room, into houses