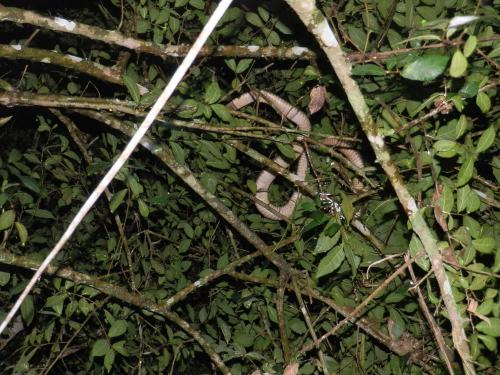 PHUKET: Rescue workers in Thalang, in the north of Phuket, last night were forced to shoot dead a meters-long cobra after frantic attempts to remove it from a tree within a workers camp failed.

Kusoldham Foundation rescue workers were called to the camp, located in Baan Lipon, Srisoonthorn, at 10:30pm by Somneuk Jaturapushkul, the village headman’s assistant.

“Villagers were afraid the snake would bite someone, possibly even children in the camp, so they called for help,” Mr Somneuk said.

The rescue workers, renowned in Phuket for catching and releasing large snakes, spent nearly three hours trying to coax the snake from its position, high in a tree in the middle of the camp.

“In the end, as they couldn’t get the snake down, the villagers asked if they could shoot it. They didn’t want to risk anyone being bitten by the snake,” Mr Somneuk said.