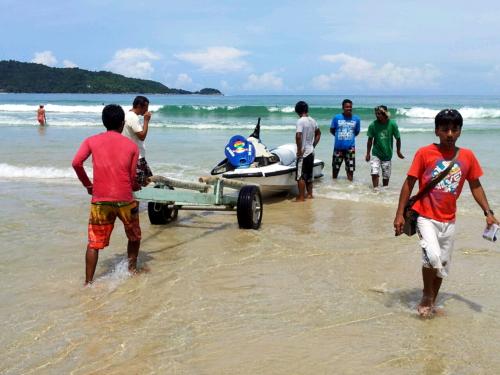 PHUKET: A Chinese tourist remains comatose after being seriously injured in a collision between the rented jet-ski he was riding and a paragliding speedboat at Patong Beach today.

Rescue workers and police were called to the beach at about 11am.

“We arrived to find Shen Baocheng, a 27-year-old Chinese tourist, already pulled from the water by lifeguards,” said Lt Thawatchai Srimai of the Patong Police.

“However, he was still unconscious and rescue workers were unable to rouse him,” he told the Phuket Gazette.

Mr Shen was sped to the emergency room at Patong Hospital.

An hour later, he was transferred to Phuket International Hospital near Phuket Town.

Jet-ski owner Sunan Tongrain told police that Mr Shen had rented the jet-ski, having come to Phuket on holiday with his Chinese girlfriend and eight friends.