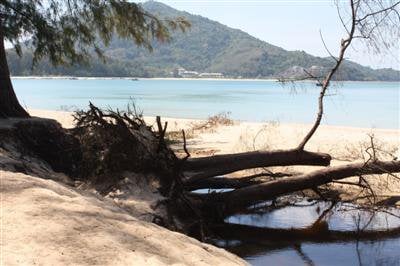 Leatherback turtles recently returned to Sirinath’s Mai Khao Beach to lay their eggs after an absence of years.

Despite this unexpected good news, park director Nonthawit Chaturabandit is warning that unless something is done about encroachment and coastal erosion, there may not be much left of Mai Khao and Nai Yang beaches in just a few years’ time.

The 56,000-rai park includes both beaches, as well as the hilly, forested region south of Nai Yang and 43,000 rai of protected water and offshore seabed.

Mr Nonthawit said 260 people have encroached upon more than a fifth of the 13,000 rai of the park land.

Many are farmers who are trying to prove they occupied the land before its establishment as a national park. If they fail to prove this in court, the park would reclaim their landholdings, Mr Nonthawit said.

Intruders recently encroached on an additional 3 rai of park land. After the authorities noticed that buildings had been erected on park land, they destroyed the structures. Thus far nobody has admitted responsibility for the encroachment, he said.

‘Ton Son‘ pine trees found along both Mai Khao and Nai Yang beaches were also under threat, he said.

A police investigation is currently underway over the mysterious felling of eight of the trees at Mai Khao late last year near the West Sands hotel and condominium project.

Natural forces are also damaging the park as wind is eroding exposed land on which the pine trees stand. Three or four of the trees have already fallen for this reason and coastal erosion is threatening another. Park officials are currently in talks with local village leaders over building a breakwater to help protect the coastline, he said.

The park chief said he hoped Prince of Songkla University researchers could help determine the best shape and length for the breakwater and come up with a cost estimate.

“If we do nothing, erosion will destroy the coastline,” he said.