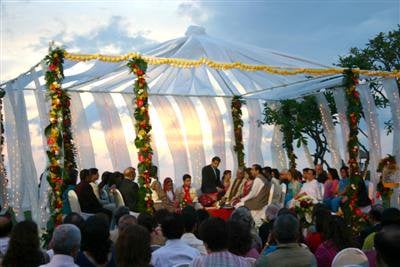 PHUKET: The Tourism Authority of Thailand (TAT) will push Phuket as a wedding and honeymoon destination in selected markets including India, the head of the local TAT office said.

“Phuket is second only to Bangkok for the number of foreign couples choosing to have wedding parties in Thailand. It is also the top choice among couples wanting to exchange vows in a beautiful beach setting in Thailand,” she said.

The TAT is keen to host more weddings of well-heeled couples from India, known for its elaborate and often very expensive matrimonial services.

“Indian wedding parties are the largest, with groups from 300 to 500 people sometimes coming in and booking entire resorts and paying over one million baht,” Mrs Bangornrat said.

The luxury Banyan Tree resort in the Laguna Phuket resort complex recently hosted one such event, she said.

“The TAT is already marketing in Mumbai and New Deli, offering special inducements to groups of 300 or more,” she said.

“Indian groups always bring in their own wedding organizers, consultants and cooks. They prefer to hold weddings from November to February. Having wedding parties in internationally branded hotels seems to be a new trend among affluent Indian families,” she said.

The TAT will also try and lure more wedding parties from Australia as well as South Korea.

Phuket is already a popular destination for South Korean honeymooners, she said.

Staff at the JW Marriott Resort and Spa in Mai Khao said three or four foreign couples would exchange vows at the resort during the current high season she said.

The TAT is also hoping to bring in more groups of beauty pageant contestants from Europe for photo shoots and pre-pageant publicity events, as these are an effective way of introducing Phuket’s tropical charms to Europeans, she said.

Phuket has already played host to three such groups: 37 French beauties in 2008; 24 from Poland in October 2009, and 20 Miss Belgium contestants in November last year.

Hosting the French contestants gave Phuket so much positive publicity that it led to the introduction of regular charter flights from France, with tourists taking part in the same activities they watched the contestants doing on television, she said.

As for the current tourism picture, Mrs Bangornrat said current hotel occupancy rates on the island are in the 70%-80% range on average, but advance bookings at resorts in March are currently only about 30% to 40%.

The TAT hopes independent travelers and people booking late will keep occupancy rates high for the rest of the high season.

German stabbed to death in Phuket