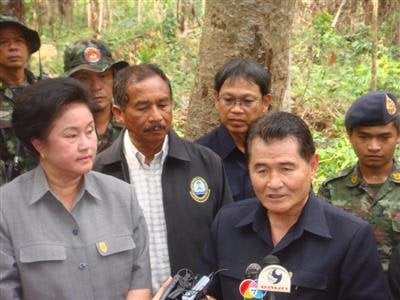 THALANG, PHUKET: Human encroachment has laid waste to more than two-thirds of a large forest reserve in the north of Phuket, it emerged last week.

Phuket Governor Wichai Phraisa-ngop last week accompanied an inspection team from the Ministry of Natural Resources and the Environment (MNRE) to the site of the latest devastation.

Led by MNRE Inspector General Monthip Sriratana Tabucanon, the team were in Phuket to witness firsthand the extent of the island’s encroachment problem.

After touring other encroached forest areas in Karon and Patong, the team visited a 100-rai plot located inside the reserve and just 300 meters from the Bang Khanoon Agro-forestry Office.

Many of the trees in the area had already been felled, while others still stood dying.

Encroachers had cut deep rings around the tree trunks, allowing the sap to leak out.

This technique kills the trees, making them easier to cut down.

Gov Wichai described the trees as rare and irreplaceable, saying some were more than 80 years old.

“No matter how much we spend on reforestation, [the new trees] will never be worth as much,” he said.

Gov Wichai pleaded with the Phuket people to end encroachment.

“If we ruin our natural resources, tourists will stop coming to our province,” he said.

Dr Monthip said the MNRE had ordered local officials to use aerial photography to detect deforestation on the island.

Any future damage would be reported directly to Natural Resources and Environment Minister Suwit Khunkitti and subsequent investigations would determine whether local officers were involved, she said.

Figures released by the MNRE’s Phuket office last year showed the rate of forest destruction in Phuket had quadrupled over the last six years.