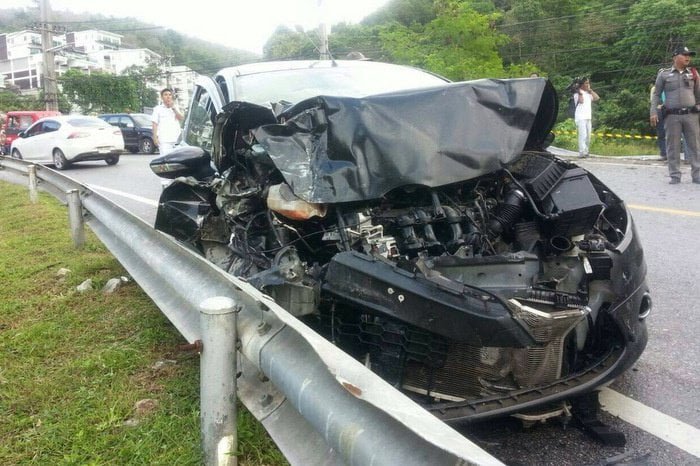 PHUKET: The nationwide Seven Days of Danger safety campaign for the New Year holidays drew to a close at midnight last night, with Phuket recording two deaths and 45 people admitted to hospital for injuries in 44 accidents.

The last day of the seven-day campaign, which began at midnight on December 30, recorded five accidents in Phuket in which five people were admitted to hospital, according to statistics compiled by the Department of Disaster Prevention and Mitigation (DDPM) Phuket Office.

The campaign statistics also officially recognized the death of Tantima Thaworn, 37, after her car was involved in the accident on December 30 that saw her car crushed under a tour bus carrying 37 Russian tourists (story here).

Although Ms Tantima succumbed to her injuries on New Year’s Day, her death was not recognized by the DDPM-Phuket office on either January 1 or 2, but was included in the revised death and injury toll for January 3.

Phuket’s sole fatality was Anoma Muangpanij, 20, who died after being knocked off the motorbike on which she was riding pillion in a collision with a Mercedes-Benz on Chao Fa East Road, Wichit, just after midnight on December 30 (story here).

Preedee Eng-seng of the DDPM-Phuket office noted that although Phuket has more drivers on the road with each passing year, this year’s New Year death and injury toll for the holidays was an improvement on the five dead last year.

“This year we could call the campaign a success, which was mainly due to the support we received in improving safety,” he told the Phuket Gazette.

“Governor Nisit Jansomwong gave his full support, which resulted in better co-ordination among provincial authorities, the police and local community leaders, including municipalities.

“This led to more, and better enforced, road-safety checkpoints and better public awareness campaign to reduce the number of accidents throughout the campaign.”