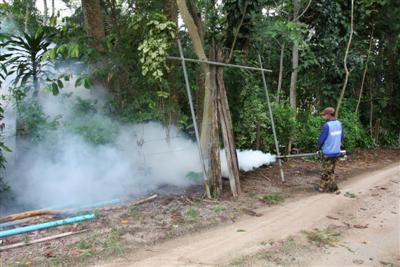 PHUKET: While much attention has been placed on the fight against the spread of swine flu in Phuket, the island is still suffering from a chikungunya outbreak and has the highest per capita infection rate of any province in Thailand.

According to recently-released figures from the Phuket Public Health Office (PPHO), there have been 2,155 confirmed cases of the disease in the province in the first half of this year – with no deaths.

PPHO Director Dr Pongsawas Ratanasang said 98.6% of the victims were Thai, with 31 cases reported among foreigners.

Most of the foreign sufferers are low-wage Burmese laborers, whose work and substandard living conditions put them at risk of being bitten by the Aedes mosquito that spreads the virus that causes the disease.

Statistically, Phuket had an overall incidence rate of 669 reported cases per 100,000 people for the first half of 2009.

The province thus ranks first in the country although the number of cases remain much higher in the lower south, where the outbreak originated.

Dr Pongsawas also noted the high incidence rate for Phuket is skewed by Phuket’s huge unregistered population of migrant workers, both from other parts of Thailand as well as Burma.

The incidence rate is calculated as the number of reported cases divided by the registered population, which is less than half of the actual number of people on the island according to most estimates.

However, chikungunya cases often go unreported as many sufferers do not seek medical attention from hospitals, but from private clinics or simply by treating themselves with non-prescription drugs.

In a breakdown by district, Thalang had the highest incidence rate overall followed by Kathu and Muang Districts.

Within Thalang, tambon Srisoonthorn had the highest incidence in June followed by Thepkrasattri, Pa Khlok, Cherng Talay and Sakoo.

The PPHO has adopted a “blitz” campaign in its efforts to rid the island of the disease using a variety of measures including disease control and prevention units at both district and tambon levels.

The units are tasked with collecting statistical data to track the spread of the outbreak, organizing preventative measures such as spraying mosquito breeding sites, and raising public awareness about how to avoid mosquito bites. They also advise people about what steps to take if they do contract the disease.

The public relations effort is being conducted in tandem with steps to control the spread of the A(H1N1) virus that causes swine flu.