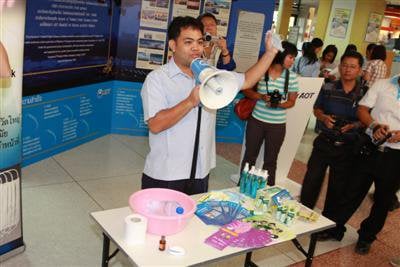 PHUKET CITY: There have been 25 confirmed cases of swine flu in Phuket, according to figures released by the Phuket Provincial Health Office (PPHO) yesterday.

In addition to the seven cases reported in the last update, there have been 18 additional cases: nine hotel employees and nine students at four different schools, all in Muang District.

PPHO deputy director Dr Wiwat Keetamanoj and fellow officers visited the four schools to talk with administrators and staff, advising them to check all students each morning.

Any students with flu-like symptoms should be sent home immediately and subsequently tested for the A(H1N1) virus that causes the disease. This is the best method of preventing the spread of the disease in a classroom environment, he said.

PPHO Director Dr Pongsawas Ratanasang asked the press not to release the names of the schools with confirmed cases and does not advise closing schools following isolated cases of infection.

“Closing the schools is pretty useless, because the students may go to cinemas, karaoke bars and game centers, where they can spread the virus to others just as easily,” he said.

The best solution is to quarantine swine flu patients and treat them at home, he said.

The PPHO has asked schools to clean rooms at least once a day and open the windows of air-conditioned rooms for at least one hour a day.

Doorknobs and toilet handles in schools, entertainment venues and restaurants should also be cleaned regularly with soap or detergent.

Dr Pongsawas said the PPHO is thus far satisfied with its ability to halt the spread of the disease, which has yet to claim any lives in Phuket. The tracking of confirmed cases has revealed that the disease has only spread “three generations” in Phuket at most, he said.

Without the preventative measures put in place the number of cases on the island might already have passed the 1,000 mark, he said.

As for the thermal scanning devices at Phuket International Airport, they have proven ineffective at detecting swine flu patients and their use will be discontinued next week, he said.

Phuket has sufficient quantities of the antiviral drug oseltamivir to treat swine flu patients, but the drug will only be administered to patients in high-risk groups, such as children under the age of five, senior citizens of 65 years old or above and people suffering from preexisting medical conditions.

Those not in risk groups should be treated with bed rest and regular medication to relieve symptoms, he said.

A vaccine against the A(H1N1) virus is expected to arrive near the end of the month. Those first in line for injections will be people most likely to come into contact with infected patients, such as medical staff, childcare workers, government officers and members of the media.

A single injection of the vaccine should be effective for two or three years, he said.

Nationwide there have been 1,473 cases of swine flu resulting in five deaths.

The most recent fatality was a 15-year-old student in Chonburi province who was already suffering from chronic illnesses including a brain tumor and diabetes.