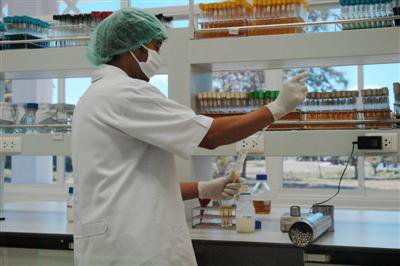 PPHO chief Dr Pongsawas Ratanasang said Piboonsawaddee School in Phuket City over-stacked cartons of the UHT milk, causing some of them to split and their contents to spoil.

Forty-eight students fell ill after drinking the milk on June 18, with 16 of them requiring treatment at Vachira Hospital. All were allowed to go home within a day.

The results of the tests, performed at Phuket’s new Medical Science Center in Thalang, were released yesterday.

“It was a storage problem. The cartons of spoiled milk had twisted and split. We found bacteria in there that must have come from outside. It wasn’t the sort of bacteria that would have been introduced during the manufacturing process,” Dr Pongsawas said.

It was also possible that rats or other animals bit the cartons open, he added.

“The milk hadn’t expired so it should have been alright. We tested some cartons from the same batch and they were fine,” he added.

The PPHO informed the school and Phuket City Muncipality that the Nong Pho Dairy Co-operative plant in Ratchaburi, the manufacturer, was not to blame.

“The milk company has high manufacturing and transport standards. Schools in Phuket City have to improve their storage and checking processes,” Dr Pongsawas said.

The children’s teacher might have forgotten to test the milk before giving it out, he added.

The old batch of UHT milk has been removed from Piboonsawaddee School. The school has already been supplied with a replacement.

“The PPHO suggests teachers perform random checks on milk before they distribute it to children. They should open a carton and pour it into a glass to check the color, smell and taste. We don’t want to see any more students sick from bad milk,” Dr Pongsawas said.

Schools in Phuket City that stopped giving out UHT milk as a result of the poisonings have resumed distributing it as normal.

Security Act will have little impact on Phuket: Governor