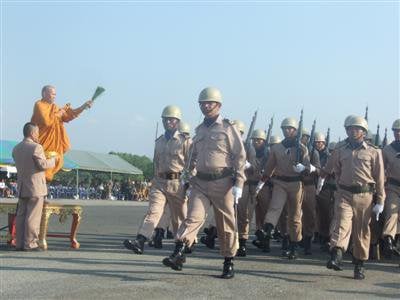 The flag, presented to military commanders by HM King Bhumibol Adulyadej in 1952, is the most revered flag in Thailand and is always present during Trooping of the Colors ceremonies held in honor of HM The King’s birthday in December.

Following a performance by a Royal Thai Military Band, 300 soldiers in formation swore allegiance to Nation, Religion and King before the flag at the army camp in Phang Nga’s Thai Muang District.

All top military commanders in the region attended, as well as Phang Nga Governor Yiumsuriya Palusuk, Phuket Deputy Governor Smith Palawatwichai and a host of other regional dignitaries.

In accordance with a Thai government resolution in 2006, Thai Army Day is celebrated on January 18 instead of January 25.

The move commemorates the Ayudhya Period victory by troops under the command of King Naresuan The Great over Burmese Crown Prince Phra Mahauparacha in an epic battle fought with elephants.