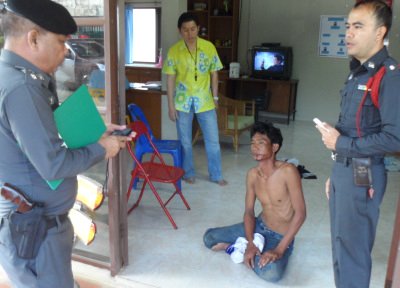 PHUKET: A would-be cat burglar bungled his attempt to rob a Phuket minimart after falling through the roof into the store’s stockroom below, leaving him trapped until he was found by staff this morning.

Arriving at the scene, a minimart in Pa Klok, police found 38-year-old Thepmongkol Thongsri lying injured in the stockroom.

“He gained access to the store by climbing onto the roof and removing the tiles. However, he fell as he was attempting to descend by rope, landing on the floor and injuring his chin and leg,” said Thalang Police officer Somkit Kaosung.

Mr Thepmongkol, a native Khon Kaen Province, remained trapped in the storeroom until he was discovered by staff as they arrived for work this morning.

“Mr Thepmongkol told us that he used to work at the minimart, but had been fired. He admitted that he robbed the store once before. That time he stole cigarettes and about 200,000 baht in cash,” said Col Somkit.

Phuket protesters back home after rally in Bangkok