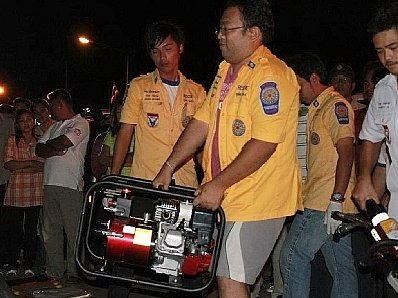 PHUKET: Well-known Phuket businessman Pornchai Sawasri and a female companion died in a car accident in Thalang last night when Mr Pornchai lost control of his vehicle and hit a power pole after swerving to avoid a dog.

Thalang Police were notified of the crash at 9:30pm. At the scene, on a curved section of Thepkrasattri Road northbound opposite the entrance to Thalang Hospital, they found a crowd gathered around a Mitsubishi Pajero sports utility vehicle that had crashed at high speed into the pole.

A woman later identified as Boonma Kaewmanee, 54, was alive when rescue workers pulled her from the front passenger’s seat. She later died of her injuries at Thalang Hospital.

It took Kusoldharm Foundation rescue workers two hours to remove the body of the driver, later identified by his ID card as 49-year-old Pornchai Sawasri.

Eyewitnesses told police that Mr Pornchai swerved to avoid a dog and lost control of the vehicle on the slippery road, which was covered with oil.

Mr Pornchai was a well known person in Phuket, whose businesses included a construction vehicle rental business and a “bird condo”, a structure used to raise swiftlets for the bird’s nest soup industry.

Mr Pornchai’s daughter, who arrived at the hospital later, told police that her father was on the way to pick her up at Phuket Airport when the tragedy occurred.