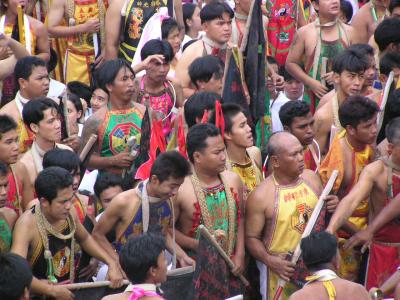 PHUKET: Residents in downtown Phuket are busy gearing up for the annual Vegetarian Festival.

Celebrated by the Chinese community on an island best known for its beaches, stylish resorts, and laid-back attitude, the annual Vegetarian Festival showcases Phuket’s more ‘mystical’ side.

A combination of vegetarian food, peaceful chants, non-stop ear-splitting firecrackers and often macabre processions, the festival is primarily for local residents, although Asian and some other packaged tourists do turn up in town to view a very different side of the Pearl of the Andaman.

The festival, which runs from October 18 to 26, has been an annual merit-making event in Phuket for more than 150 years.

It is believed to have started in the town of Kathu by a visiting theater troupe from China. Struck down by a mysterious epidemic, the entertainers decided they had fallen ill because they had failed to pay proper respects to the nine Emperor Gods of Taoism.

As penance, they erected Chinese temples and held a vegetable festival to ward off any residual bad luck. According to local legend, the unorthodox remedy worked and the festival has been held ever since. Abstention from sex and alcohol were added in later years for absolute purification.

From next Sunday, the whole town will fly yellow flags to mark the beginning of the spiritual retreat.

On the eve of the festival, a large pole is raised in each Chinese shrine, and the nine emperor gods are invited to descend from the heavens and take part in the ceremonies.

At midnight, nine lanterns are lit and hung on the poles, signaling that the festival has begun. Food stalls fly yellow little flags to indicate they serve only vegetarian food, and devotees dress in white for the entire nine days to show they intend to remain pure.

While vegetarian food is tempting and the Chinese shrines are gaily decorated, most visitors focus on the maa song, who are the ‘mediums’ the gods enter during the festival.

The maa song manifest supernatural powers and perform self-mutilation so they can absorb evil from other individuals and ensure good luck for the entire community.

Each morning begins with processions through the town. At dawn, one can find scores of young men thronging the inner sanctums of the temples and preparing to mutilate themselves.

At the base of the shrines, they go into a trance, begin speaking in tones and don colourful aprons with Taoist symbols, looking on as doctors make cuts at both sides of their mouths.

The festival climaxes with a procession of people deep in a trance, piercing their tongues, cheeks, nipples and other parts of their anatomy with spears, daggers, sharpened branches, bicycle chains and just about anything else that can be rammed or pulled through one’s body.

Possessed by the spirits of the nine deities, the ascetic devotees apparently feel no pain and show little sign of real injury.

Phuket Piracy: Who controls the gold?