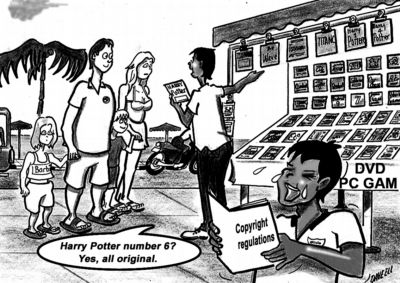 PHUKET: Thailand is now jumping into the intellectual property protection game in a big way. For decades prey to foreign-controlled bounty hunters who collect commissions by seizing pirate editions of copyrighted works, the nation is now moving to secure local copyrights and patents – and to marginalize foreign violators.

Together with its regional partners, Thailand will create an ‘Asean Database on Patent Design’ providing protected status to local designs and allowing their owners to pursue patent violators.

A Patent Co-operation Treaty has been written and Thailand’s Intellectual Property Department is aggressively promoting its services: acting as an agent, translating documents, and arranging fee payments for Thais seeking international copyright protection.

The stated aim is to ‘raise the nation’s competitiveness’, but there may be, too, a hidden aim – to capitalize on licensing fees and the spoils of copyright litigation.

It is important to remember that by no means is every copyrighted or patented property a viable product.

Copyrights are often taken out on things never produced by the copyright holders, who merely hope to ‘cash in’ if someone else produces those things in the future.

Sometimes proprietary rights are established on products either steeped in a nation’s history and traditions or otherwise held legitimately as someone else’s intellectual property, as famously happened in the case of Thailand’s hom mali or ‘jasmine’ rice strain.

Several years back the Phuket Provincial Administration Organization, in an embarrassing burst of nationalism, seriously contemplated proceedings in the international court system to wrest ownership of the phuket.com domain name that had already been legally registered to a more forward-looking private firm.

Potential for abuse across a wide range of copyright issues calls into question the crucial issue of who is competent to judge.

Only last month agents from a Thai music company once again went round to entertainment venues in Phuket demanding 3,500-baht licensing fees which, they insisted, would cover playing in public of virtually all copyrighted music.

Venue owners say they were told that if they failed to pay up, their sound systems would be seized forthwith, along with all ‘copyrighted’ recorded media on the premises.

Copyrighted? Who can tell? The difference between a legal digital version of one’s favorite song and a counterfeit is a difference in number strings, in many cases just light impressions on a poorly cared-for disc.

How can we expect police in the street to say which is which – especially if led by warrant-wielding lawyers whose vested interest is in seizing as much as they can?

Ubiquitous litigation looms in this rush to make everything proprietary, even items once thought not subject to ownership.

The stakes are high, and if there is to be any justice in the outcome it must first be established, if indeed it can: ‘Who is competent, morally and technically, to judge?’