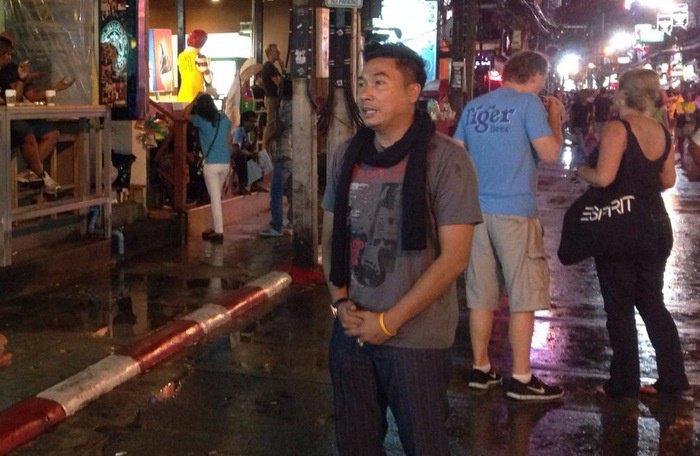 PHUKET: President of the Patong Entertainment Business Association Weerawit Kurasombat has called on representatives from nightlife venues in Patong to gather tomorrow to review policies concerning the conduct of bouncers.

“I plan to implement strict rules about the use of violence by security,” Mr Weerawit said. “If any bouncer at any club is violent with a tourist, the club will be shutdown for at least two days.”

Mr Weerawit said that more details of the new policies would be revealed after the meeting tomorrow.

Security guards told officials that the fight started when the men refused to pay their bill and one of the tourists started fighting with a guard.

“That’s garbage, we went in there with tickets with drinks,” said one of the Australian men, named by ninemsn only as ‘Aaron’.

Aaron then went on to detail the confrontation to ninemsn. He said that the bouncers were aggressive from the very beginning, and that when he stepped in between a guard and his friend, the guard knocked him unconscious in the club.

“Not one of us threw a punch,” Aaron added.

Management from the White Room Night Club denounced the violent actions of the five bouncers and sacked them immediately following the incident.

“We, the management of White Room Night Club, are shocked and upset by the violent incident. We strongly reject all forms of violence and we are currently reviewing the necessary measures to ensure nothing like this will ever happen again,” management wrote in a statement to the Phuket Gazette.

“Needless to add, the culprits of this despicable act have had their employment at White Room immediately terminated.”

Mr Weerawit expressed his dissapointment with the tourists fleeing Thailand before resolving the issue.

“I am very sorry about what happened, but I would have appreciated them clearing up the issue through the police, rather than going to the media back home,” Mr Weerawit said. “I worry about Phuket’s reputation.”

If the Australian Embassy does not issue a formal complaint, the Patong Entertainment Business Association prefers to move on from the incident.

“We do not want the problem to get bigger, so we will stay silent and improve ourselves.”

Phuket Riot: Cause of motorists’ deaths confirmed, intent under investigation