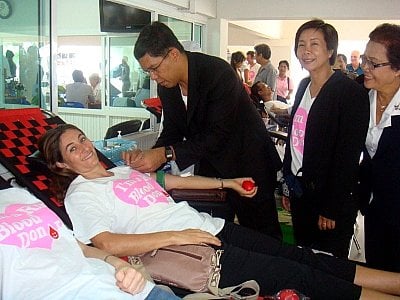 PHUKET: The Phuket Regional Blood Center is calling for blood donations from foreigners to restock dwindling supplies at the Phuket repository.

The blood is urgently needed to restock supplies of blood types common among foreigners, says Pornthip Rattajak, acting director of the center.

“We are asking for Rh-negative blood because this is the tourism high season. Many foreigners come to Phuket at this time of year, and each year many of them are involved in accidents. They will need this blood,” Ms Pornthip explained.

Specifically, the Phuket blood bank is looking for donations of blood types O-negative, A-negative and AB-negative.

“Only three in 1,000 Thais have one of these blood types, but they are much more common among foreigners,” Ms Pornthip explained.

Ms Pornthip explained that the blood stocks recently sent to Bangkok to help victims of the floods were not Rh-negative.

“The blood we sent was mainly to help Thais, and as I have mentioned, the blood types we now need are not common among Thais,” she said.

To boost the number of donations by foreigners, the Phuket Immigration Office will host a special blood donation drive on December 7.

Donations will be accepted from 9am to 3pm.

Phuket Vice Gov calls for Patong to “be nice’ to tourists