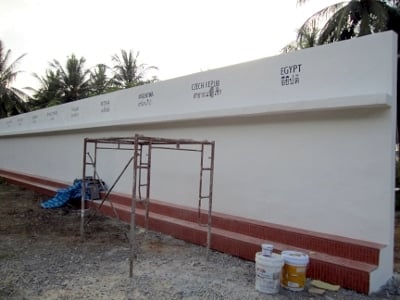 PHUKET: The addition of a new section to the Tsunami Wall of Remembrance in Mai Khao has been completed in time for the memorial ceremony on December 26.

The original wall bore images of all the countries whose nationals died in Thailand in the 2004 tsunami. However, planning permission to allow the construction of a police building meant that a new perimeter wall intersected the memorial wall.

The obstructed section listed three countries and would have been unapproachable to those wishing to pay their respects.

“The extension to the Wall of Remembrance has been finished,” said Police Superintendent Sakchai Limcharoen, Tah Chat Chai Police Station.

“The work included inscribing the names of the three countries – Argentina, the Czech Republic and Egypt – to the wall. Everything is now ready for the Remembrance of Tsunami Victims ceremony on December 26,” he said.

The plan was to remove the section of memorial wall isolated within the newly constructed police compound and rebuild it at the other end of the existing memorial wall.

“The agreement, drawn up during the term of former Mai Khao OrBorTor President Sarawut Srisakhukham, authorized the addition of a new section to the end of the wall.

“Responsibility for the new section falls to Provincial Police Region 8. The Mai Khao OrBorTor was not involved in construction of the new section,” he added.