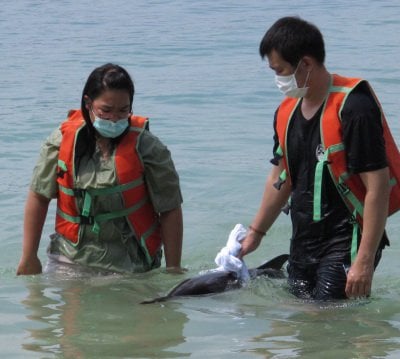 PHUKET: Officers at the Phuket Marine Biological Center (PMBC) who released a stranded Spinner dolphin back into the sea on Saturday are confident that it is now safe.

“Our officers monitored the release area after letting the dolphin go on Saturday. We haven’t seen it return to the beach,” Dr Kongkiat Kittiwattanawong, who heads the PMBC’s Endangered Species Unit, told the Phuket Gazette.

“It is very cheerful dolphin, so we hope that he is doing okay in the ocean,” he added.

Despite a happy ending, the early stages were an uncertain time for the young male dolphin.

“We had to monitor the dolphin continually until he was strong enough to be released. Our biggest concern was the possibility of an internal infection.

“We did not keep him at the center very long as we did not want the change of environment to cause stress. That can compound an existing illness and make it more difficult to treat,” Dr Kongkiat explained.

On the subject of avoiding stress, Dr Kongkiat pointed out that the PMBC had yet to solve the issues of keeping of dolphins at the center.

“We are now seeking to have a fenced-off area in the ocean specifically to treat marine animals, especially dolphins and dugongs, which are clever, social animals.

“These animals suffer from stress if they are kept in places where they do not belong, so we are studying this possibility to increase our ability to treat the animals and give them a better chance of survival,” he said.