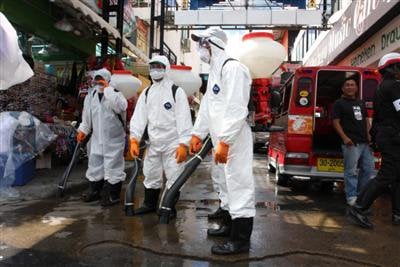 PHUKET CITY: There have been seven cases in Phuket of the viral infection that causes swine flu, but the situation is “under control”, health officials say.

PPHO Office Director Dr Pongsawas Ratanasang told the Gazette that the first confirmed case was that of an Australian tourist who visited Phuket before moving on to Hong Kong, where he developed flu symptoms and was later confirmed to have contracted the A(H1N1) virus that causes swine flu.

It was widely reported that the first case was a Hong Kong ‘national’, but this was not true, Dr Pongsawas said.

Three staff members of a pub visited by the Australian, including its 26-year-old cashier, have since come down with flu symptoms, later confirmed to have been caused by A(H1N1).

The fifth case was a French tourist treated at Bangkok Hospital Phuket, and the sixth was a nine-year-old Thai girl who arrived in Phuket by car.

Both patients have recovered and returned home, Dr Pongsawas said.

The seventh case is that of a Phuket girl studying at the Ratwinit Bangkaeo School in Samut Prakan.

She developed flu symptoms and was sent home by the school. She is now being treated at Mission Hospital.

Relatives and friends who came into contact with the swine flu patients are being given anti-viral medication even if they are symptom-free, Dr Pongsawas said.

Describing the situation as under control, Dr Pongsawas reiterated that all of the carriers had come from outside Phuket and that the number of “second generation” cases was limited to just the three in Patong.

However, with over 10 schools in Bangkok reporting outbreaks and being closed down temporarily, the return of students from these schools to their home provinces poses a risk to Phuket.

To keep A(H1N1) from gaining a foothold on the island, residents and tourists are asked to take preventive measures, seek prompt medical attention if flu symptoms develop and co-operate fully with doctors and medical staff, he said.

In its latest public relations campaign, the PPHO today distributed information and face masks to people at the Phuket City Bus Terminal and at cinemas on the island.

Meanwhile, the number of confirmed cases of the mosquito-borne viral disease chikungunya in Phuket now stands at 1,301, more than any other Andaman Coast province.

The rise in the number of cases partially reflects the fact that PPHO workers have been going door-to-door seeking patients. Many people suffering from the disease do not seek out medical treatment, he explained.

To stop the spread, the PPHO has been giving one-month supplies of mosquito repellent to workers in rubber plantations where chikungunya is known to spread rapidly under wet conditions.

“We will get chikungunya under control in July [2009],” Dr Pongsawas added.