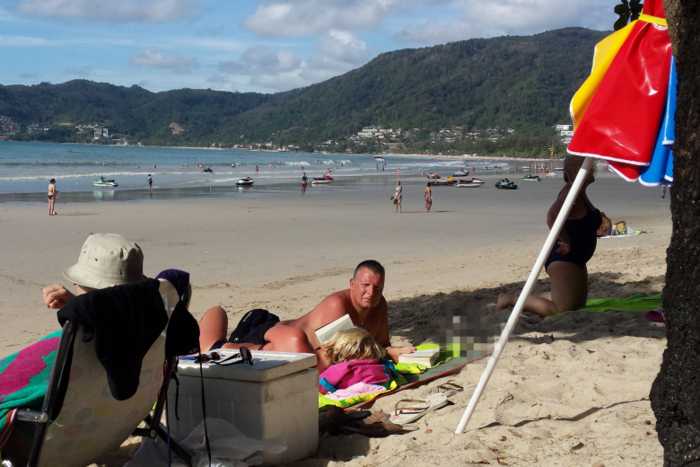 PHUKET: Vice Governor Chamroen Tippayapongtada today re-confirmed to the Phuket Gazette that tourists are not allowed to bring their own umbrellas or sun loungers to Phuket beaches.

The confirmation from one of the island’s top-ranking officials follows a news report claiming that the ban – made public by a Gazette report on Saturday (story here) – had been lifted.

“I don’t know what other English-language websites are reporting, but the ban on tourists bringing their own umbrellas to the beach is still in place,” Vice Governor Chamroen told the Gazette this afternoon.

“We are trying to get beach umbrellas back as soon as possible. To prevent ownership of the beach, umbrellas will be provided by local municipalities soon.

“However, until the official order has been announced, I can confirm that private umbrellas are not allowed,”

Patong and Karon Municipality leaders also denounced rumors that tourists were allowed to bring their own umbrellas and loungers to beaches at Patong, Kata or Karon.

“Some tourists have misunderstood the situation and tried to bring their own umbrellas to the beach. Please be aware that this is not allowed,” Patong Mayor Chalermluck Kebsab told the Gazette.

“Just today, we had to send our staff down to talk to some tourists who brought their umbrellas to the beach. Thankfully, they understood the situation.”

Authorities are aware that tourists arriving on the island for high season are wanting some beach shade during their visit.

“We are working on it. Soon there will be free beach umbrellas,” Mayor Chalermluck said.

Weerasak Anekwongsawat, the chief administrative officer (palad) of Kata-Karon Municipality, also confirmed to the Gazette that the municipality was waiting for a final decision from the provincial government before allowing any umbrellas or beach loungers back on the beaches at Kata and Karon.