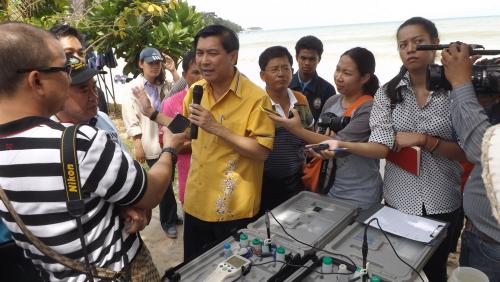 PHUKET: The Phuket Marine Biological Center (PMBC) will not post the pollution readings of its seawater quality tests online, the Phuket Gazette has confirmed.

Instead, the center will publish only its self-determined star rating system, PMBC Director Ukkrit Satapoomin told the Gazette this week.

The PMBC issued a press release last week announcing that the reports were now available online in English (click here). However, the star ratings only reveal whether the PMBC considers the water at Phuket’s famous beaches as very good, good, fair, poor or very poor.

In its most recent report, labelled “Marine water quality along the coastline of Phuket in 2013”, the PMBC declared that the seawater at Patong Beach was in “good condition”.

However, Dr Ukkrit explained that the improvement in the water quality was due to “seasonal variations”.

“The improvement in the water quality is due to the fact there is less rain, which means fewer pollutants are being washed into the bay,” he said.

The water in the northern and central areas of Patong Bay were declared to be in “fair” condition.

However, Dr Ukkrit declined to explain why the water quality was different in these areas.

The public posting of the PMBC’s water-quality ratings follows an order by Phuket Governor Maitri Inthusut in August this year (story here).

“We have been collecting seawater samples from along the Andaman coast and testing it for quality for many years now,” he said.

Dr Ukkrit did not elaborate why the work he was doing was not brought to Governor Maitri’s attention or that of Phuket-based Regional Environmental Office 15 Chief Pornsri Suthanaruk, who were both present to observe the “launch” of the water-quality tests at Patong Beach on August 23, which are to take place once every two months*(story here).

Dr Ukkrit did explain that the most recent ratings posted online were from October, as some of the equipment required to test sea water quality had recently broken.

“It’s fixed now and we should have the latest ratings online soon,” he said.

“Evil man of Krabi’ eligible for bail during appeal process