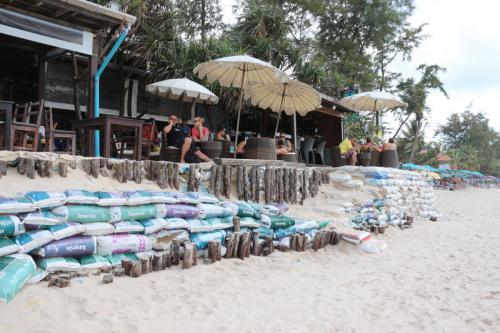 PHUKET: Leading Patong figure Preechavude ‘Prab’ Keesin responded yesterday to the inspection that singled out his family’s resort by expressing his willingness to take down any structures found to be encroaching on the beach.

Mr Prab, whose father is Patong Mayor Pian Keesin, told the press fears of erosion had led to sea walls being built on the beach in front of the resort.

The resort in question, Patong Bay Garden Resort, was built in 1985 and taken over by the Keesin family in 2006, Mr Prab said.

“I noticed the beach in front of the hotel was being eroded by waves, and getting shorter and shorter every year.

“That’s why the hotel set up the sand-bag-and-stick wall along the beach, to try to prevent erosion. We were afraid that without that, the waves would eventually erode the hotel structure itself,” he said.

“If the investigation finds that the walls we made encroach on the beach area, we will remove them,” he said.

Mr Prab invited the officials who visited the resort on Monday (story here), including Tourism and Sports Minister Somsak Pureesrisak*, to examine the resort at any time, and also offered to show them his land documents.

When asked why he was not present when officers went to the resort on Monday, Mr Prab said that he intentionally chose not to appear.

“I felt the officials were being disrespectful toward me,” he said. “Why did they have to come with so many Phuket and Bangkok media? It was as though they had proven me guilty already.”

He also questioned why his family’s resort had been the only one inspected that day.

“Why did they only inspect our hotel when actually there are many other hotels in Patong that have done the same thing,” he mused, adding that he was happy to help officers “as long as they do not have any hidden agendas”.

“I’ve talked with Minister Somsak about the taxis in front of Jungceylon. I explained to him that I have organized the taxi queue and made the taxis legal according to the law. If he wants to examine them, I am happy to help,” he explained.

Mr Prab concluded by again denying that he is a mafia figure, arguing that he does not deserve to be on the list of Phuket mafia figures issued by the DSI on August 9 (story here).

“I believe I behave well,” he said. “I participate in Patong and general Phuket community activities. If they say I am mafia simply because I know a lot of people, then the whole thing is really just wrong,” he said.

“I do know who is who in Patong and who has done bad things, but I will never name names. I am not a mafia member, I am just an ordinary person. So I will live my life that way,” Mr Prab said.

* CORRECTION: The initial report mistakenly identfied Department of Special Investigation (DSI) Director-General Tarit Pengdith as also present at the inspection of the resort yesterday. The error is regretted.

Action to be taken on coral, wastewater at Racha Island