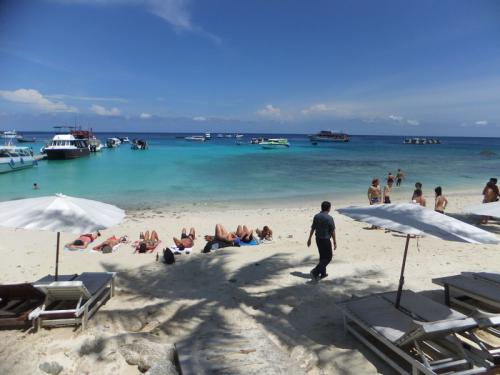 PHUKET: A framework to deal with longstanding problems at Racha Yai Island, particularly coral damage and wastewater, was drafted at a meeting at Phuket Provincial Hall yesterday morning.

To prevent boat operators from damaging corals by dropping anchor on them, 20 more moorings will be added, though their locations have yet to be determined, said Tanet Munnoy, director of the Department of Marine and Coastal Resources.

The move is in response to video taken in early October which documented anchors wedged against corals (story here).

“We are going to add both big and small moorings. The bigger moorings will be better able to handle the weight of the big boats such as diving and fishing boats, while the smaller ones will be for the speedboats and longtails,” Mr Tanet said.

Many of the moorings already in place are damaged, he said, primarily because of overloading.

Mr Tanet also plans to send two officers to the island to ensure that boats are using the moorings rather than dropping anchor on coral, and vowed to charge offenders. The officers will also determine whether enough moorings are in place and whether they can handle the weight being put on them.

Mr Tanet asked for help from boat operators and local residents in helping to monitor and take care of the moorings.

An additional move to protect coral, divers and swimmers was already laid out at a meeting last week with boat operators, Mr Tanet said. Bays at Racha Yai will be divided into three zones: a swimming zone, a mooring zone and a diving zone.

“In the future, we plan to use the Koh Tao zones as a model. We’ll divide the areas into protected zone, used zone and underdevelopment zone,” he said.

The second major topic, wastewater, will be addressed next Monday when officials visit Racha Yai to conduct a Biological Oxygen Demand (BOD) test on the wastewater released by the bungalow resort and restaurant Raya Father. BOD is a measure of the degree of water pollution.

“If the water is polluted, they will be given a warning. If they don’t fix the problem we will take legal action,” said Kasem Sukwaree, Chief of the Phuket Natural Resources and Environment Office, who will oversee the testing with Mr Tanet, members of the Pollution Control Department and Rawai Municipality officers.

As for the safety of tourists who have been drowning in increasing numbers at the island, and whose deaths motivated Sarit Jandee, head of the island’s Conservation Club, to present an ultimatum to the Governor on October 3, (story here) two proposals are on the table.

“A health center on the island is a possibility,” Governor Maitri said, referring to the request by Mr Sarit for such a facility.

“We have to wait for Phuket Provincial Health Office (PPHO) to do a feasibility study,” he said.

The study was proposed by PPHO deputy chief Krit Sakulpat during officials’ visit to the island last Saturday.

The other proposal, already being acted on, is to offer more training to tour guides. The DMCR offers guides – but does not require they attend – a tour guide training course once a year, Mr Tanet said.

It is not well-attended, he added.

“We will offer it more often – three times a year – and strongly urge the guides to attend.

“And this year we will work together with Phuket Tourism Business and the Guide Registration office. They will be better able to advertise the news about the course than we are,” he said.

The next seminar is expected to take place in December.