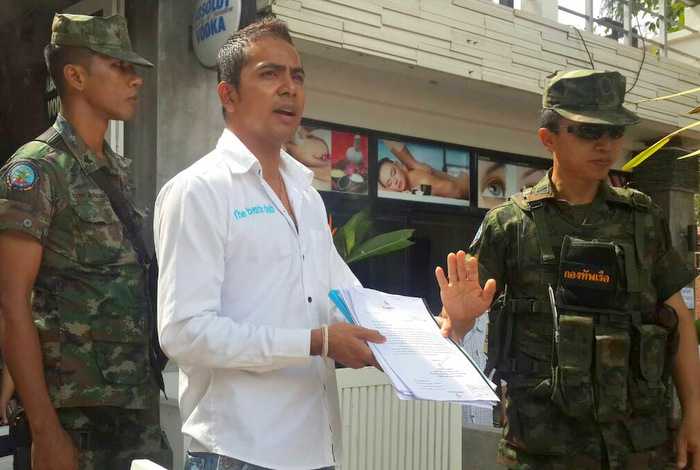 PHUKET: The local contingent of the Royal Thai Army yesterday called for the demolition of a Phuket beach restaurant to be halted while the owner’s appeal is heard in court.

The Beach Club restaurant and the Baan Bussaba Massage & Beauty venue at Nai Yang Beach were both targeted for demolition under the National Council for Peace and Order (NCPO) beach cleanup campaign earlier this year.

Personnel from Royal Thai Navy Third Area Command, based at Phuket’s Cape Panwa, arrived in numbers yesterday, armed with a large backhoe, ready to demolish the two venues, at the request of the local authority, the Sakoo Tambon Administration Organization (OrBorTor).

“We have received the latest court order, issued on October 24, lifting the temporary protection for these restaurants,” said OrBorTor Vice President Surin Yotharak.

However, The Beach Club owner Aroon Prewphanchoo argued strongly against the move to demolish the restaurants, as he claimed that he had filed an appeal that had yet to be concluded.

“This case is on appeal and I have filed my complaint to the Damrongtham Center [Ombudsman’s Office] in Bangkok,” said Mr Aroon.

“I also have letter of temporary protection from the Ministry of Interior in Bangkok until the appeal process has concluded.”

After initial raids on the two venues earlier this year, Mr Aroon presented to the court a SorKor 1 land-use document for the one plot on which both venues are located.

The Phuket Provincial Court on September 25 ordered temporary protection for venues to ensure they were not demolished before the court had ruled on the case.

However, during the court hearing, the Thalang Land Office filed documents confirming its understanding that both The Beach Club and the Baan Bussaba businesses were on public land.

The Thalang Land Office reported to the court that, according to its records, the SorKor 1 presented by Mr Aroon was actually for a plot nearby and had been upgraded to a Chanote land title for a resort in the same area.

The standoff yesterday resulted in the Army officers at the scene calling for negotiations to be held at the main office inside Sirinart National Park.

After two hours of talks, Thalang District Chief Supot Chanakit exited the park headquarters to announce a stay of execution for The Beach Club.

“We have to wait until the appeal process has concluded,” Chief Supot said.

“Regardless, we asked to make sure that the demolition did not occur during the Asian Beach Games. It would not be good for the image of tourism businesses on the island.”

Formula One heads to Brazil