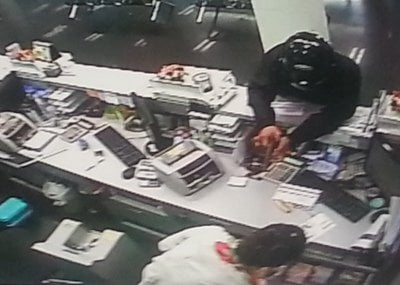 PHUKET: An armed man clad in a black jacket and wearing a motorbike helmet robbed the Kasikornbank branch near SuperCheap, just north of Phuket Town this afternoon, making off with 2.7 million baht.

The man was recorded by the bank’s CCTV cameras entering the branch on Thepkrasattri Road at about 3pm.

Armed with a homemade handgun, the man threatened one of the tellers, instructing her to fill a bag with money.

Fearing for her life, the teller obliged.

“I was very scared. I just did what he told me to do,” she told the Gazette.

The man quickly left the bank, speeding off on his getaway motorbike heading north.

“I have alerted police across the island to make sure he does not get off Phuket. At this stage we are still searching for him. He escaped with 2.7 million baht,” Col Sermpan told the Gazette.

Officers are also searching for the blue-and-white Honda motorbike used as the getaway vehicle.

The motorbike was not fitted with license plates when the robbery was committed.