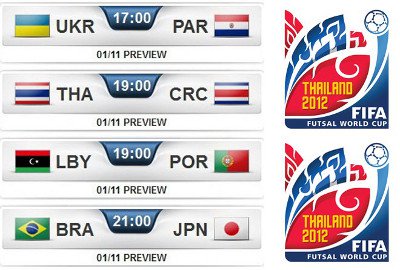 PHUKET: Hosts of the FIFA Futsal World Cup 2012, Thailand have dropped three spots in the world rankings list down to 14th from 11th previously.

The world rankings list was recently updated ahead of the sport’s most prestigious tournament, which kicks off tonight in Bangkok and Nakhon Ratchasima.

The world’s top 8 sides, however, remained unchanged, with Spain prevailing as the top side for the second consecutive year.

Likewise, the Futsal World Cup 2008 Champions, Brazil, are still second best and are followed by Italy, Russia, Portugal, Argentina, Iran and Ukraine in the 3rd to 8th places, respectively.

This year’s Asian Champions, Japan, moved up into 9th place, swapping ranks with Paraguay, who moved down into 10th place.

Jumping ahead of Thailand in the 11th through 13th places were Romania, Serbia and Croatia.

Thailand’s demotion in rank comes after losing five of its last six international friendly matches – succumbing to Spain twice, as well as to Australia (no 30), Panama (now no 32 from 35, previously), and Oceania region champions Solomon Islands (up to no 45 from no 46).

The ‘War Elephants’ only recent win came in a World Cup friendly match last week against world no 28 Egypt.

Aside from the top 10 teams, Thailand and Serbia, the other 12 teams to participate in this year’s championships are as follows:

The Phuket Gazette’s Steven Layne is now in Bangkok to cover the action.