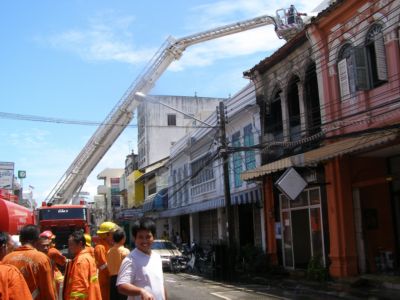 PHUKET CITY: Firefighters were called to Phang Nga Rd this morning after flames engulfed the 111 Phuket Art Gallery building, destroying up to 50 paintings on sale at prices ranging from 10,000 to 50,000 baht each.

A local resident alerted police and fire officers around 11:30 am after seeing smoke rising from the building, located behind the Sinthavee Hotel. Five fire trucks arrived within 10 minutes of the call and police closed the road to help the firefighters.

A man and a woman who live nearby braved the heat to rescue a number of paintings from the gallery.

“I helped a girl who lives opposite me to remove four or five large pictures from the shop, but we couldn’t move any more than that. The heat from the second floor eventually became too much,” said the man, who declined to give his name.

Around 400 onlookers watched as the fire spread from the second floor of the building to the gallery on the ground floor, causing both the roof and the upper floor to collapse.

The second floor of the building, made mostly of wood, was used as living quarters for artists who work for the gallery.

Fortunately, nobody was present at the time of the fire, said Aree Kongpol, 43, a partner of 111 Phuket Art Gallery business, which opened about one year ago.

Firefighters contained the blaze around midday.

The cost of the damage and the cause of the fire have yet to be determined.