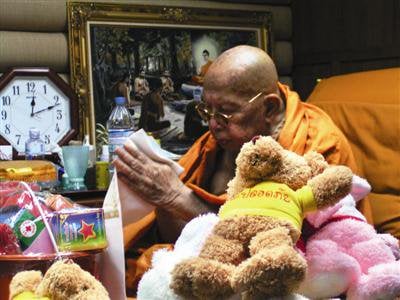 PHUKET CITY: A revered Buddhist monk preparing to celebrate his 113th birthday could be the world’s oldest living man.

Luang Pu Supha, abbot of Luang Pu Supha temple in Chalong, has presented the Gazette with copies of government-issued identification papers showing that he was born in Sakon Nakhon province, in the the northeast of Thailand, on September 17, 1896.

Mr Breuning will celebrate his 113th birthday on September 21.

According to the Guinness World Records’ official website, the title was to be awarded to Breuning following the death of British World War One veteran, Henry Allingham, who died on July 18 this year, aged 113.

Mr Allingham, the last surviving British WWI veteran, inherited the title, albeit briefly, from Tomoji Tanabe, a Japanese national who died on June 19.

Guinness World Records said in July that a formal announcement would be made as soon as the record had been verified by a gerontology expert.

But that was before Luang Pu Supha’s age was known.

His official identification documents, including his current house registration and ID card, show that he is four days older than the American, thus making him the world’s oldest living man.

Thanapong Korudom, chairman of the Luang Pu Supha Temple committee, told the Gazette that he would like to invite Guinness representatives to come to Phuket to verify that Luang Pu Supha is in fact the world’s oldest living man.

The secret to the aged monk’s longevity is to “eat less, speak less and always speak the truth,” Mr Thanapong said.

The revered monk was still happy and healthy despite his age, but ate only nine mouthfuls of food at each meal, Mr Thanapong said.

“We should all look within ourselves and question how Luang Pu Supha has managed to achieve his great age,” he said.

Luang Pu Supha avoids spices and salts in his diet, but is said to have a sweet tooth, his favorite dessert being khao neaw kaew (sticky rice with sugar).

For a in-depth report and another photo of the revered monk, read the September 5 issue of the Phuket Gazette, due out on the island’s newsstands this afternoon.