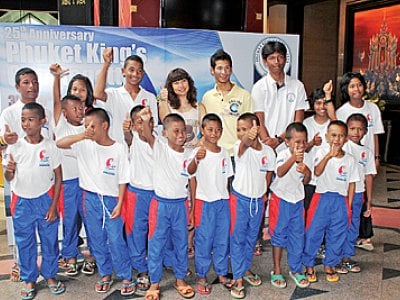 PHUKET: A strong fleet of 34 Optimist and eight Lasers took part in the recent King’s Cup International Dinghy Regatta, with fifteen sailors from the Phuket Youth Sailing Club (PYSC) between the ages of seven and 15 who joined other sailors from Phuket, Phang Nga, Samui, Songkhla and Sattahip to take part in the three-day event.

On day one, the course was set to challenge the youngster’s sailing skills by making them thread their way through moored boats off Kata Beach.

With two races completed, race three got underway in disappointingly calm conditions. Shortly thereafter, the fleet was hit by a very strong squall bringing winds of up to 35 knots which caused many of the boats to capsize.

The more experienced sailors enjoyed the extreme conditions and three Optimists finished in style with the PYSC’s Akapoj Kankaew posting his first win of the day. In the Laser Fleet, all the sailors finished the race with Patteera Mee-u-samsen winning the race to give her three wins for the day.

Recognition should be given to the many boat owners who helped rescue the young sailors and to spectators for collecting boats that had been washed up in the surf.

Day two began grimly with rain and no wind to start the proceedings, but a light northeasterly arrived allowing the first race to get underway. However, the wind didn’t stay for long and both fleets were becalmed, requiring much patience and concentration on behalf of the sailors. Eventually some progress was made, but both courses had to be shortened to enable the boats to finish within the time limit.

On day three, the battle for first place in the Optimist Class continued between the leader, Akapoj Kankaew, representing PYSC, and Sattahip native Sutida Poonpat. Although Sutida won both races, it wasn’t enough to clinch the title, with Akapoj eventually claiming first and PYSC securing seven places out of the top eight.

In the Laser fleet, Patteera Mee-u-samsen kept her lead, winning the event by posting four firsts out of six races.