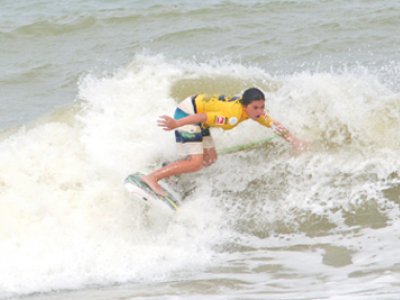 Phuket’s own super surfer has returned home after three weeks on the road to finish up the 2011 surfing season on a high.

Having posted three wins and a second place at competitions held in Hong Kong and Malaysia, Annissa has finished second overall in the professional women’s ranking for the inaugural Asian Surfing Competition (ASC) Pro Calender 2011.

Three weeks ago, Annissa traveled to Hong Kong for the 7th Reef Cup 2011 event with hopes of going one better than last year, where she finished first in the women’s open division and second in the Groms (junior) event.

Many people don’t see Hong Kong as a surfing destination, but nestled in the New territories is Big Wave Bay. Competitors and spectators alike have to carry their boards, sleeping bags and tents into the park, and setup camp in the sand dunes behind the beach break. Then over two days the competitors get to take on the monsoon generated South China Sea swells.

Annissa entered both the Groms and the Women’s Open Short-Board events and claimed the winners trophies in both.

Following a brief return trip home a fortnight ago to catch up on her schoolwork at Satree Phuket, Annissa traveled to Terengganu-Malaysia to compete in the Quiksilver Best Event Surf Contest at Batu Burok Beach.

Annissa won her heat and then confirmed her position as one of Asia’s best surfers by defeating her arch rival and four-time Indonesian surfing champion,Yasnyiar Gea, to win the Women’s Open Division. It was a particularly sweet victory for Annissa, as Gea had claimed first place ahead of the 13-year-old at her home competition – the Quiksilver Best Event on Patong Beach.

Tim Hain, organizer of the ASC Tour asked Annissa about her expectations of winning this event.

“I didn’t think I had a much of a chance to win because I’m the smallest and youngest of the girls, and with the conditions today it was really hard. But I’m so happy to have won this, really happy, and I’m very thankful to my Dad and Mom, to Quiksilver and Ark surfboards for supporting me, so I could come here and compete,” she said.

In Sunday’s finals, Annissa had another glorious battle with Gea. However, the Indonesian picked up a great wave in the dying seconds and with two of her trademark powerful cutback maneuvers she manged to steal the title from Annissa by just 0.7 points – the narrowest of margins.

This was the second time that Annissa had been leading in a final to be pipped at the post by Gea.

Annissa is already back to school. But not for long, as the ASC Pro Surfing Tour 2012 starts again on January 6 with the Big Foot Monsoon mayhem event at Desaru in Malaysia.

As an international sports star on the rise and with so many years ahead to fulfill expectations, it is a daily struggle to meet the financial requirements for travel and accommodation. To keep Annissa competing at the level necessary for continued development, even with such sponsors as Quiksilver and Ark Surfboards, it is vital that she receive financial assistance from local business or private interests.

For more information on how to assist Annissa in her attempts to become Asia’s number one surfer email malflynn@gmail.com or call 081-970 1963.