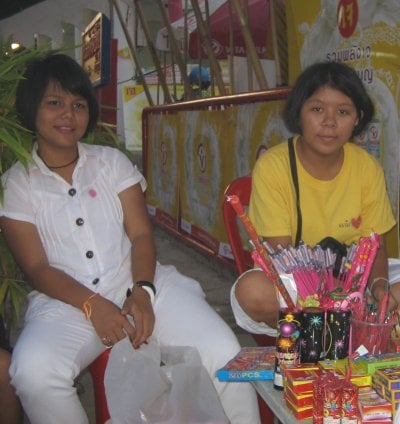 PHUKET: Phuket Town residents might want to invest in safety goggles and industrial earplugs, as the Phuket Police will not try to control the use of firecrackers and more powerful fireworks during the upcoming Vegetarian Festival.

Phuket Provincial Police Commander Pekad Tantipong said today the use of fireworks is a long-standing spiritual tradition that would be allowed during the nine-day festival that begins on Friday.

Although illegal, the sheer number of firecrackers and larger fireworks involved make it practically impossible for police to control their use during the festival, he said.

That being the case, police will instead focus on traffic control and providing extra public security, especially as there is expected to be an increase in crime with so many people converging on Phuket Town during the festival.

When the festival comes to an end police will once again crack down on the sale and use of fireworks, Maj Gen Pekad said.

“I get a lot of complaints about firecrackers and other fireworks causing public annoyances, especially from Chalong and Kathu [police districts]. After the festival is over we will crack down on the illegal sale and use of fireworks,” he said.

Fireworks and traffic are a leading source of complaint among Phuket Town residents during the festival, which takes place on important thoroughfares in the city.

In the current Phuket Gazette snap poll, a strong demographic bias is emerging on the topic of the festival in general.

More than double the number of people who identify themselves as local foreign residents say they are “not looking forward” than those that say they are.

Thai nationals are evenly split on the issue.

To vote or view the results, click on the icon at the top of this page or here.