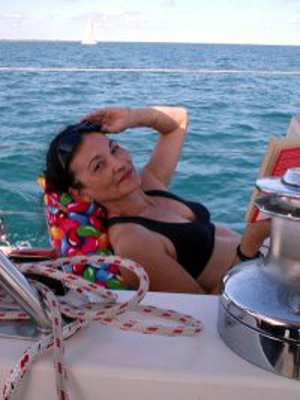 PHUKET: A sea search for an Australian woman reported to have fallen overboard from a yacht sailing to Phuket late last week was called off today.

News that a search was underway for Carmel Brookes, an Australian-born resident of Langkawi Island in Malaysia, was first reported to the Phuket Gazette by her close friend Michelle Black yesterday.

Ms Black was desperate for information about the search after learning from friends that Ms Brookes fell overboard from the yacht Moondancer while cruising off the coast of Trang on February 2.

Ms Brookes was sailing from Langkawi to Phuket with her companion Dr Gerald Goeden when she vanished. The circumstances of how she came off the vessel remain unclear.

“We cannot understand it as Gerry is a very experienced yachtsman. He was working on a coral reef project at the Andaman Resort Langkawi,” Ms Black wrote.

“He and Carmel were taking a holiday from his work to go sailing for a few weeks and had been planning their trip for some time. Carmel had been very excited and happy about it. I am a close friend of hers and I cannot imagine how this could happen to her, as she is always so careful and has been sailing with Gerry many times before,” she added.

After several attempts to contact various Navy units yesterday, the Gazette was finally able to confirm today that the Thai navy had found Moondancer with Dr Goeden still aboard, but that a sea search involving Navy, Marine Police and Koh Rok National Park staff was called off today.

A Navy source said the search effort lasted almost a week, far more than the usual two days in such cases.

If the body of Ms Brookes is discovered at sea at a later date, Marine Police will be responsible for its recovery, the Navy source said.

“This is a tragedy that I cannot believe and my heart is breaking for losing one of my dearest ever friends… Carmel, I love you and I am wishing you are found sitting on a beautiful little beach somewhere safe, and that this is all just a nightmare,” Ms Black wrote today.

Dr Goeden has been in telephone contact with Ms Brookes’ relatives confirming that the accident took place, she added.

Bob Brindley passes away in Phuket