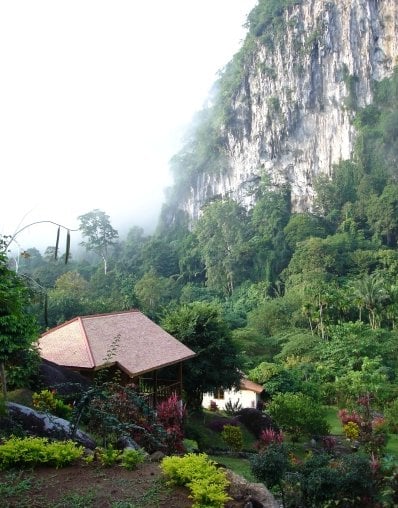 The confirmed toll this morning is one dead and four injured, two seriously, they say.

“One person died and a few hundred others had to stay in eight temporary shelters set up by the District Office at local temples and schools.”

However, some 1,000 villagers in other at-risk villages in the area have been asked to evacuate temporarily as a security precaution, he added.

“The area is still flooded. Khao Phanom District will hold a briefing on the situation this afternoon,” the officer said.

Chuengnarong Choochuay, chief administrator (Palad) of Khao Phanom Municipality, confirmed that a second mudslide took place in the municipality at about 10am today.

“We haven’t received any reports of deaths. The road to the village is blocked, so officials are having trouble getting through to render assistance,” he said.

Khao Phanom municipal officials and members of various other government agencies and private rescue foundations are organizing the relief effort, he said.

“About 100 people have had to move out the area and stay in relatives’ homes” Mr Chuengnarong said.

It was still too early to do an accurate assessment of damage to the village, he said.

Southern Thailand has experienced unseasonably heavy rains this March, similar in intensity to the downpours that typically hit Phuket at the usual height of the monsoon season in September.

Regionally, nearly a million residents living in flood-hit areas in the South have been left stranded with no access to land and air transport, even as the number of deaths increased to nine, with the grim prospect of heavy rains pounding many of the areas for the next few days.

A storm yesterday aggravated difficulties for the hardest-hit province of Nakhon Sri Thammarat, damaging 250 homes in coastal areas and the Talum Phuk peninsula.

The raging winds felled a number of power poles, causing blackouts in many areas.

Local residents of the peninsula complained about the total lack of assistance from authorities, and shortages of food and electricity. Fishermen are relying entirely on high-interest loans from illegal lenders to pay for their regular expenses while they are unable to go out fishing.

In Lan Saka district, a large number of people living at the foot of small hills have been evacuated following mudslides, with the possibility of more coming. A large pile of debris has covered farmlands and damaged them.

The main cause of mudslides is human activity in hillside areas that strips the soil of its natural vegetative cover and compromises natural runoff channels, leaving soil exposed to water-logging.

The area is closed to all traffic except emergency response crews and government officials. Access is only possible by four-wheel-drive vehicles after the mudslide covered roads.