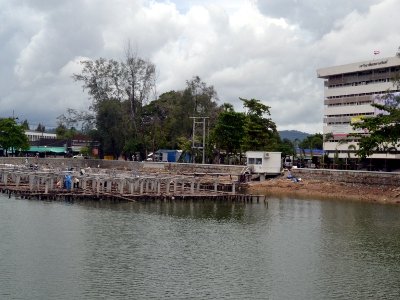 PHUKET: The light and music fountain under construction at Saphan Hin in Phuket Town will stage its premiere performance next Wednesday.

Paiboon Upatising, president of the Phuket Provincial Administration Organization (OrBorJor) announced the news at a meeting with Kathu Municipality on Tuesday.

“We are now testing the fountain’s light and sound system to make sure it will be ready for the grand opening on September 26. The show will start at 7pm,” he said.

The debut of synchronized squirts will relate the story of the Vegetarian Festival, narrated by popular artist Todd Tongdee Lavelle.

Mr Paiboon explained that after the launch there will be three fountain performances every night: at 7pm, 8pm and 9pm.

Each performance, with narrations in Thai and English, will be about 30 minutes long.

“During the day we will have the fountain operating, but without any light and sound,” he said.

The performances will change to mark the special occasion of each month, he added.

“In November we will have a Loy Krathong performance, and in December we will honor the biggest occasion for Thais, HM King Bhumibol Adulyadej’s 84th birthday,” he said.

The performance in January will mark New Year celebrations, February will be “The month of Love”, March will honor the Phuket Heroines Thao Thepkrasattri and Thao Srisoonthorn, and April will mark the Thai New Year’s Songkran festival, explained Mr Paiboon.

“I think this will become one of Phuket’s biggest tourist sightseeing attractions. If you come to Phuket, you have to see the musical fountain – otherwise you just haven’t been to Phuket yet,” he added.