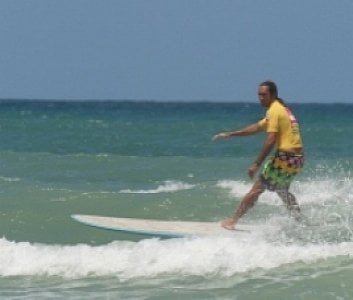 America, Australia, Burma, France, Indonesia, Japan, Malaysia, the Philippines, Singapore and of course Thailand are all represented at the event, which is now scheduled to conclude on Saturday evening September 24.

During his welcome speech he thanked Mr Surached from Quiksilver and Mr Chanin “Joob” Aiyarak of Surfing Thailand for the generous donation of 50,000 baht in support of the children and community of Patong Beach, Phuket.

A beach cleanup conducted by the Department of Marine and Coastal Resources followed the opening ceremony with children from Baan Sai Nam Yen School participating in the morning’s program.

While waiting for late registrations, organizers asked several of the surfers to paddle out for a 20 minute “expression session” and give spectators a taste for the main event. Teiki Ballian from France, Raditya Rondi from Indonesia, Mamat from Malaysia, Chatchai Samporn and Jamie Smith from Thailand, gladly jumped into the water to show off for the crowd.

Round one of the eagerly awaited Men’s Shortboard Division then got underway. A total of 56 surfers filled up the heat draw in hopes of winning a share of the 67,000 baht prize purse.

The highlight of the first round came in the 7th heat, where France’s Teiki Ballian’s frontside aerial earned him the top single wave score of the day – six points out of a possible 10, as well as the highest combined heat score of 10 out of a maximum of 20.

Teiki was delighted with his effort and the crowd’s appreciation.

“I was so stoked to land that air. I really love this place, as I have been coming here since I was 12 years old, and I come here every chance I get. I feel like Phuket is almost my home, as I’ve got a lot of friends here. I’m so happy I came here for this event, and hope that I can get into the finals,” he said.

Over the next two days there will also be a Longboard Open Division, Master’s (over 35) Division, and the Women’s Division with Phuket’s own Anissa Flynn and Genevieve Jane Irwin in action.

Organizers have called for the Longboard Open contestants to stand by at the beach at 8:00am, as tidal conditions in the early morning seem to be most suitable for the longboard competition.

There will be more Men’s Shortboard action as well, continuing with round two later on Friday morning.

The finale on Saturday evening will be a gala banquet awards presentation at the Jungceylon Mall which includes fashion shows, live music from Big Ass, one of Bangkok’s hottest bands, and an after party at Famous nightclub in Patong.

The Phuket Gazette is a proud sponsor of the Quiksilver Thailand 2011 Surf Competition in Phuket.

Phuket “Number 3′ in Thailand for AIDS