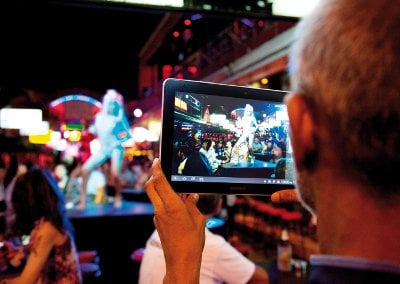 A look back at the roller-coaster ride that Phuket’s tourism industry took from start to finish in 2011.

PHUKET: The past year was marked by an ever faster and more furious flow of information on the crest of a digital technology wave.

Tuk-tuk drivers beating tourists, bus crashes, landslides on the only road over Patong Hill, and the island’s original bridge to the mainland being reclaimed by pedestrians all featured heavily in the news.
Here in Phuket, of course, all events – local, national and global – are inevitably viewed through the narrow prism of local “tourism development”.

With each passing event that either helped or hindered tourism to Phuket, the more experienced local business folk on the island repeated their mantra: “It is what it is.”

Despite the tragedy in Japan early in the year and more recently the unprecedented flooding in the lower central plains, Phuket’s tourism figures for 2011 were strong.

Arrivals at Phuket Airport were up year-on-year in October and November, during the height of the floods. This was attributed to an increase in direct flights to Phuket from abroad as well as from Bangkokians trying to flee floodwaters.

Arrivals and departures at Phuket Airport were set to top eight million for the first time, with long queues at Customs and Immigration as a result.

The Phuket Commercial Affairs Office revealed that the number of tourists arriving in Phuket during the first 10 months 2011 increased year-on-year, while financial statistics showed foreign up by more than 60 per cent.

In Phuket, perhaps the best indication is the number of new hotels, guesthouses and other tourism-related businesses that sprang up along Phang Muang Sai Kor Road behind Jungceylon in Patong.

Jet-skis, for better or worse, remain popular with tourists.
Chief among developments in 2011 was the ongoing plan to expand passenger throughput capacity at Phuket Airport to accommodate up to 12.5 million travelers by 2014. By year’s end there was also more talk of expanding the runway to allow the largest airliners.

More flights than ever flew between Phuket and the capital and other destinations in Asia, most notably China, but some regional domestic services were cut, including the Phuket – Haad Yai service by Phuket-based Happy Air.

Several new bus services were launched this year, including a “VIP” service to Chiang Mai as well as other long-haul services to points in Isarn.

On the maritime front, work is almost complete on the new Chalong Bay Marina. The 44-slip facility raises to about 1,000 the number of yachts that can be served at the island’s five marinas, but this is still not enough to meet demand and the Marine Department is seeking funding to sink 300 more moorings in Chalong Bay and at Ao Por in 2012, and set up a GPS tracking system for all yachts in Phuket waters in 2013.

The end of the year also saw the opening of the new Krabi Boat Lagoon Marina. Phuket hosted yet another successful King’s Cup Regatta and Superyacht Rendezvous in December, much to the delight of the Tourism Authority of Thailand.

Not all arriving by boat were welcome, of course. In February, 70 stateless Rohingya refugees landed in Rawai. They were detained for a time, then presumably deported.

Whether by air or by sea, once here, tourists without their own vehicles are still left to Phuket’s world-famous public transport “system”. While tuk-tuks continued to reign supreme on the west coast, both in terms of fares and assaults on drunks, the real story of 2011 was a series of blockades by black-plate taxis of cruise ships and even US military aboard ships arriving at the Deep Sea Port.

Negotiations between cruise ship tour companies and the taxis ended with a tenable truce after the taxi drivers were guaranteed access to a certain percentage of the passengers, yet another concession to the self-entitled transport syndicates.

The Tourist Police Volunteers opened an office in Chalong.
While a new route was added to the award-winning Po Thong pink bus network in and around Phuket Town, there have been no takers in the private sector in 2011 who dare to take on available government concessions to operate hop-on, hop off bus services linking the airport with Kamala, Patong and Rawai: another battlefield victory for the taxi cartel.

Plans to free the streets of Phuket Town of lumbering inter-provincial buses remain on hold, held up by a single strand of red tape. Phuket Bus Terminal 2 on Thepkrassatri Road turned two years of age earlier this month, but has yet to serve a single passenger due to local opposition led by Rassada Mayor Suratin Lianudom.

Mayor Surathin, who happens to live right across the street, opposes breaking the median strip in front of the station to allow buses to head north. It remains to be seen how much of an issue this will turn out to be in Mr Surathin’s bid to retain the chair in the upcoming election.

Given the state of public transport on the island, it comes as no surprise that the number of vehicles on Phuket’s roads continues to grow, with an inevitable rise in the number of road accidents. By mid-December, 61 motorbike riders and passengers had died in Phuket in 2011, with 28 more permanently disabled.

These figures came despite various road safety campaigns during 2011. In addition to the never-ending mao, mai khap (don’t drink and drive) campaign, these included a “driving, don’t talk on the phone” offensive and a short-lived push to stop salaeng (motorbikes with sidecars) from carrying passengers. Readers can judge for themselves how effective these have been.

On a more positive note, 2011 was the year when police did make a highly-publicized effort to enforce a long-ignored law requiring all motorbike riders, passengers included, to don helmets. The result is that Phuket has the highest rate of helmet use in the country, at least according to the Public Health Ministry.

However, it remains unclear whether this positive result is from an initiative launched a year earlier by Phuket City Police, or just a common-sense reaction based on the above-mentioned road-accident statistics, because fatality rates in Phuket are among the highest in the country.

In terms of safety, no stretch of road in Phuket was more in the spotlight this year than Phra Barami Road, more commonly known as Patong Hill road or “Mount Mayhem”. After several dangerous sinkholes formed in recent years, one almost swallowing a car carrying the Patong Mayor, one might have thought the situation couldn’t get worse – It did.

Just weeks after the completion of resurfacing work following the installation of the 9-million-baht Patong City sign, bright new lines appeared and the treacherous thoroughfare was looking pretty good.

But appearances can be deceiving. Shortly thereafter two sections of the road slumped or washed away completely, leaving a dangerous situat